President Donald Trump’s accomplishments throughout his last three years in office should earn him a second term. 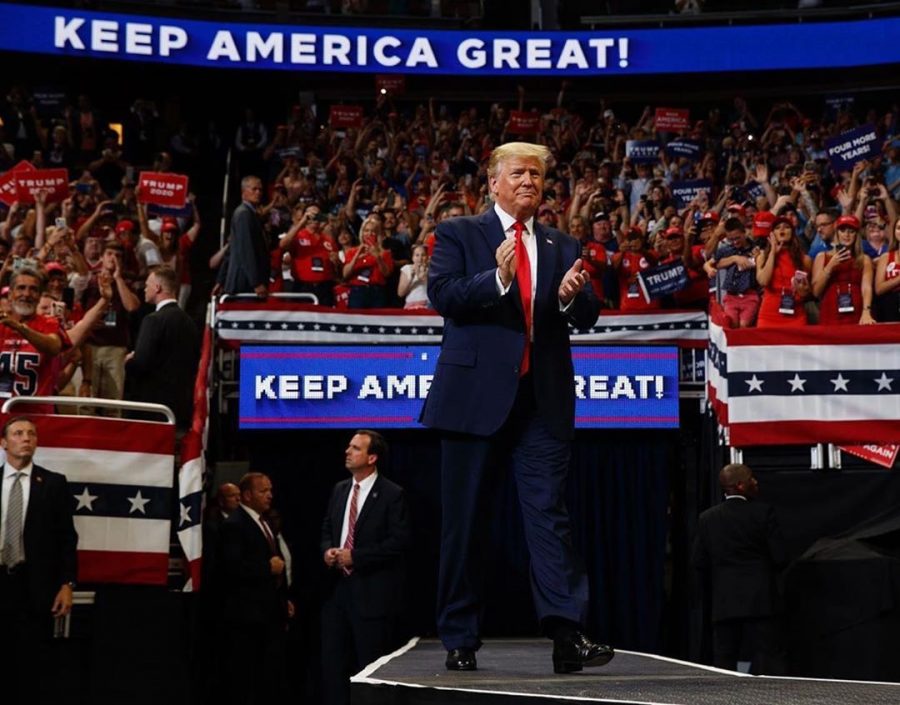 The phrase “there’s always someone who will hate you” will never be able to justify the rally of people who hate President Donald Trump. Trump’s tense relationship with the media, his inappropriate use of communication through Twitter, past mistakes and controversies and brash behavior has brought millions of Americans to criticize him and call for his impeachment. But what if we were to take that all away?

Trump has led America’s economy boom with success. He is not afraid to take action against foreign countries or individuals who stand in the way of his promise to “Make America Great Again.” If people could overlook Trump’s rough record of immature statements, they would see that he has accomplished much during his first term of presidency. Due to his success in boosting the economy, addressing international affairs as well as enacting new policies, Trump should be elected for a second term.

Read more “President Donald Trump should not be allowed to “Make America Great Again.”
TRUMP’S ECONOMIC SUCCESS
Throughout Trump’s three years in office, the economy has thrived. Economic growth has hit 3.1% as of 2019 since Trump has created new trade deals, cut taxes and supported businesses and workers throughout his presidency. In Trump’s inaugural address, he promoted the concept of “buy American and hire American” to grow the economy and put it in a cycle of supporting itself, rather than relying on international sources. He has delivered on this, since 5 million jobs have been created since Trump’s election. According to the Wall Street Journal, wages have risen 3.1% and unemployment rates are holding at 3.7%, a 49-year low.

According to the Annenberg Public Policy Center, Trump’s decision to ease back on restricting sanctions against Iran has allowed waivers from eight countries to buy oil from Iran. Trump expanded domestic energy production as, “this year the United States passed both Saudi Arabia and Russia as the world’s top oil producer,” according to The Washington Post. These have contributed to the boom in gasoline stocks and cheaper gas prices.

Trump has also successfully negotiated new trade deals with Canada, Mexico, South Korea and Japan. The North American Free Trade Agreement led to the loss of jobs, suppressed wages and the deterioration of Mexico’s environment and businesses. Unlike former presidents, Trump was able to push international leaders to negotiate new trade deals despite the impacts of the NAFTA. Trump’s United States-Mexico-American Agreement ensures more protection for American farmers and businesses by strengthening agricultural trade.
INTERNATIONAL AFFAIRS
Trump has vowed in foreign relations to put “America first.” His strong sense of loyalty to America is what drives him to be such a great president, pushing for what’s best for the American people. Trump’s foreign policy puts the interests and safety of the American people first, along with acknowledging the importance of America’s allies. On Dec. 6, 2017, Trump officially recognized Jerusalem as Israel’s capital, a pivotal moment in his presidency that marked his support for one of America’s allies.

In North Korea, Trump has refused to “play Kim’s game,” according to The Washington Post. Instead, he did not lift sanctions, left Korean assets unfrozen and imposed more sanctions on three North Korean officials for human rights abuses and brutal censorship.

Regarding the Middle East, Trump said truthfully, “We’re knocking the hell out of ISIS.” Under his presidency, U.S.-backed fighters were able to capture Hajin in Syria, the last piece of territory in the country. Trump also backed out of Obama’s Iran nuclear deal, reimposing sanctions on Tehran, which has been accused of funding several groups that the U.S. has designated as terrorist organizations, such as the Islamic Revolutionary Guard and Hezbollah.
TRUMP FOR RE-ELECTION
Part of the reason Trump is bold and has accomplished so much is because he does not try to bend to public approval. His goal is not to create political gain with flattering words, but rather show America that he can fulfill his promises with bold actions.

The vast impact Trump has had on strengthening the stock market, cutting taxes, lowering gas prices, creating jobs, raising wages and supporting businesses in just one term has led to a rise in the economy that can be expected to continue in the next four years if he is re-elected.