The applied linguistics and Bible translation concentration is being phased out due to the closure of the two graduate-level programs. 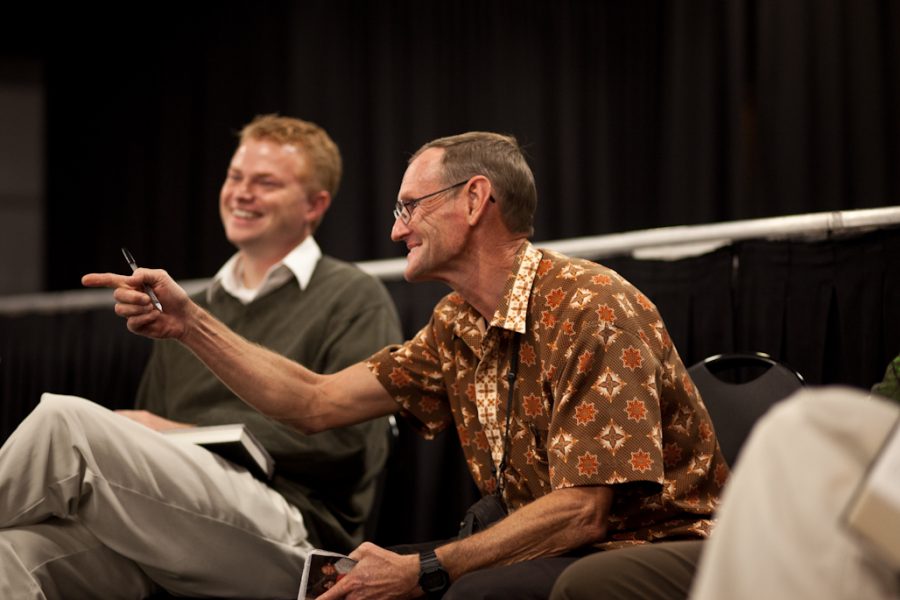 ICS professor Lloyd Peckham is one of the faculty affected by the closures.

According to Wycliffe Bible Translators, there are still 3,969 languages without their translation of the Bible, and “1 in 5 people… do not have a full Bible in their first language.” However, as Biola has been restructuring various departments this last semester, the Cook School of Intercultural Studies announced that it is closing its two master’s programs in linguistics and biblical languages and applied linguistics.

As some of the graduate classes were cross-listed with undergraduate classes, the undergraduate intercultural studies concentration in applied linguistics and Bible translation is also being phased out.
LOW ENROLLMENT HASTENS CLOSURE OF CONCENTRATION
Due to low enrollment and loss of faculty in the department, Provost and Senior Vice President Deborah Taylor said that Bulus Galadima, dean of the Cook School of Intercultural Studies, believed the program could no longer serve students well. And according to TESOL program director Kitty Purgason, the largest linguistics classes only had 11 undergrads last fall and 15 last spring, while other classes only had between two and eight students.

“We are studying these shifts and trying to position our offerings to best serve the needs of partnering agencies and the interests of incoming students,” McMahan said in an email. “We anticipate that the ICS program will continue to play a vital role in the coming years but it may take on new emphases. We are convinced that we have the resources and perspectives that are critically needed to help a new generation of leaders tackle some of the huge problems that will be confronting the church [and secular institutions] to confront rapid urbanization, international migration, and globalization among many other needs and issues.”
LOSS OF LINGUISTICS FACULTY
The intercultural studies linguistics department has been in a unique situation since the late 1980s to 1990s, as it began with Summer Institute of Linguistics at Biola. SIL at Biola was a special arrangement between Wycliffe Bible Translators and Biola that allowed Wycliffe staff members to simultaneously do Bible translation work while teaching at Biola.

According to Taylor, this system has allowed Biola to have a linguistics department, as the university only has to pay the current four faculty in the department—Rick Floyd, Lloyd Peckham, Steve Barber and George Payton—$5,000 to $10,000 a year to help cover medical benefits. Apart from these benefits, Biola did not have to pay them salaries as they raised their own support through Wycliffe.

“Given the age of our four special appointment faculty, we have always known that the program couldn’t continue indefinitely,” Purgason wrote.

Two of the four faculty members teaching in the linguistics concentration are planning to leave at the end of the semester. Barber plans to step away from teaching at Biola for medical reasons while Payton chose to move to Dallas to be closer to family. These changes hastened the end of the Summer Institute of Linguistics at Biola.
SADNESS FOR THE LOSS, GRATITUDE FOR THE LEGACY
Junior intercultural studies major Bella Danusiar is deeply troubled by the overwhelming numbers of unreached people groups without the Bible in their language. Before transferring to Biola, Danusiar minored in Arabic at American University in Washington, D.C.

Her love for language and passion for making God known among the nations naturally led her to the applied linguistics and Bible translation concentration. She said that studying in this concentration has allowed her to break barriers between herself and people with other worldviews and languages.

“I love the way [language] helps your mind grow,” Danusiar said. “The people you can reach in conversation, or in anything, doubles or triples every time you learn a new language.”

Danusiar appreciates that the Cook School of Intercultural Studies will ensure the completion of her degree before the concentration entirely shuts down. Yet, she expressed frustration that Biola does not consider the concentration worth pursuing.

“Is this not a need?” Danusiar said. “There is no one to blame. I’m just sad that it’s dwindling. This should be booming. People should be caring about this ministry to the unreached.”

Purgason also conveyed her feelings about the situation.

“I wish that there were hundreds of Biola students interested in Bible translation and that it would be as natural for Biola to hire faculty to teach linguistics classes as it is for them to hire people in STEM and Business,” Purgason said. “However, my sadness because of the end of the SIL at Biola program is tempered by my gratitude for the years of service SIL staff have given to Biola and the number of Biola graduates who are now contributing to the work of Bible translation around the world.”
HIRING NEW FACULTY IN ORDER TO CONTINUE PROGRAM UNLIKELY
While the Cook School of Intercultural Studies sees the closure of the Bible translation programs as necessary in this season, it is not opposed to reopening the program in the future.

However, Purgason indicated that it is unlikely that Wycliffe will send new staff members to Biola to continue SIL at Biola. She wrote that Wycliffe started the Graduate Institute of Applied Linguistics, which is now Dallas International University, several years after initiating SIL at Biola. Therefore, Wycliffe staff in similar situations as Peckham and Floyd go to teach at Dallas International University instead of Biola.

“It’s not completely clear what effects there will be [with this loss],” McMahan said.

Taylor said that to address this change, the intercultural studies department is speaking with Talbot School of Theology to brainstorm ways to partner with Talbot so that students who are interested in Bible translation work can be prepared for it.