The U.S. must support democracy in Hong Kong

America must continue to support the Hong Kong protesters and condemn the human rights violations committed by Hong Kong police. 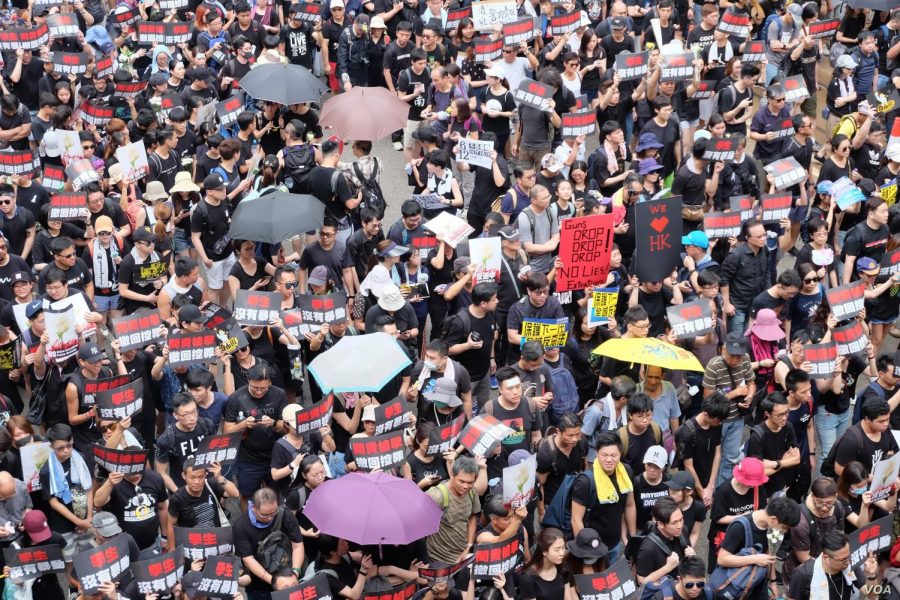 People in Hong Kong protest in fear of Chinese oppression.

Since entering its current “one country, two systems” relationship with China, Hong Kong has had an adversarial relationship with the mainland. According to the Guardian, the most recent protests, sparked by the Fugitive Offenders and Mutual Legal Assistance in Criminal Matters Legislation Bill, have quickly escalated in intensity and violence, culminating in a few citizens losing their lives. These protests mark a climactic moment in history and the U.S. must not miss this opportunity to advance human rights across the world.
THE SITUATION
According to The Independent, the different camps have taken to wearing ribbons to distinguish themselves from each other. The mainstream sides wear blue or yellow, respectively.

Yellow ribbons represent support for the people of Hong Kong. The protests stemmed from fear of Chinese oppression and interference in Hong Kong court cases through their new ability to demand extradition of felons. The people of Hong Kong fear that the Chinese government will use this power to gain control of dissidents and anti-government protesters.

The blue ribbons represent support of Hong Kong police. Many residents feel the yellow protesters have gone about this whole process in an excessively violent manner, breaking windows, torching Chinese-funded businesses and clashing with police. Those that wear blue ribbons advocate for police interference to restore order in the wild violence of the yellow protestors.
SUPPORT PRO-DEMOCRACY PROTESTERS
In light of understanding the different viewpoints in Hong Kong, the problem America faces is simple. The U.S. must decide to support pro-democracy protestors. According to the New York Times, Hong Kong protestors are asking the American government to hold Chinese leaders and officials accountable for violations against human rights and help establish democracy in Hong Kong.

The Chinese government has no checks on its power, no separate nonpartisan judiciary and no freedom of speech. These protests are only the latest in a long string of anti-communist and anti-authoritarian protests mostly led by students, going back over 100 years. The time is rapidly approaching when China will either pass America as the world’s greatest superpower or collapse into chaos. Either way, in supporting the pro-democracy protests, the U.S. is investing in the future of China and the world at large.

America either answers the call for aid—despite a potentially costly intervention in ending protests and aiding in building a democratic system of government—or abandons Hong Kong to the mercy of police, which the Washington Post reported to have responded with violence even at authorized protests.

America should answer that call. The yellow protesters are waving American flags from the tops of barricades, directly calling out America for aid in their quest for democracy. We should not take democracy for granted. Rather, our country should stand up for those whose democracy hangs in the balance.

This conflict in Hong Kong is not a one-time affair. It is the beginning of the end for China’s authoritarian regime. At least, it could be if America earns its reputation as the leader of the free world and backs the protestors in their fight for democracy.