The Eagles extend their win streak to three after an explosive win over HIU. 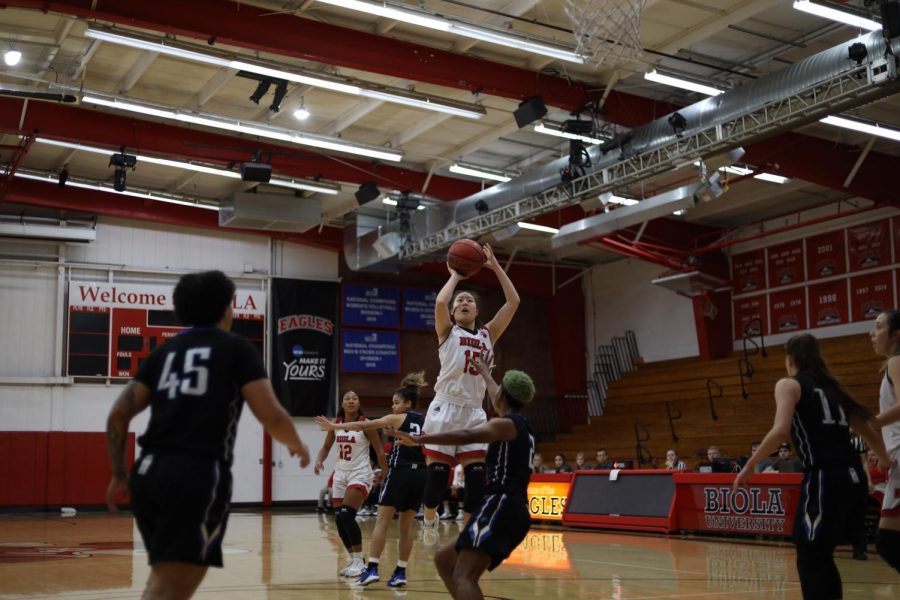 The Eagles established a quick lead from the start with sophomore guard and forward Danita Estorga putting in hard work inside, leading her Eagles with 22 points in the paint. Estorga grabbed eight points and senior guards Tatum Brimley and Kayla Macedo added a pair of 3-pointers. Biola’s solid offense led them to a commanding 25-14 lead at the end of the first quarter.

Junior forward Jazz Benn tallied a 3-pointer with an assist from Estorga to start the second quarter. Benn’s early offensive gain helped lead her to a double-double with 10 points and 11 rebounds. Biola furthered their lead with points from Benn, Estorga and Brimley and strong defense to limit HIU’s rebounds. The Eagles entered halftime up 41-28.
OFFENSE SHINES FOR BU
In the third quarter, the Royals attempted to close the gap with five steals. Senior forward Mikayla Greens went 4-4 from the line and added three rebounds. Biola narrowly kept the lead, 51-49 heading into the fourth quarter.

The bench exploded for BU, combining for 16 points in the fourth quarter alone. The Eagles continued to excel on the offensive end, shooting 53% from the field and racking up a season high of 21 assists collectively. Biola pulled past the Royals and finished the game on top, 78-60.

The Eagles (3-2) will be back out on the court in Carson, California on Saturday, Nov. 30 at 1 p.m. against California State University, Dominguez Hills.