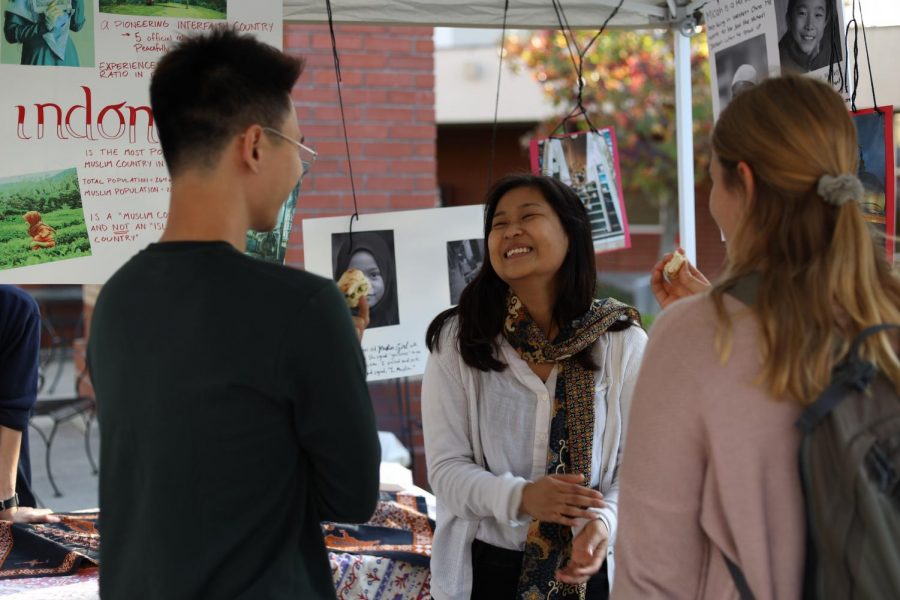 Salam and Global Student Programs and Development hosted the Muslims in Asia event at Fluor Fountain on Thursday afternoon. The event consisted of booths focusing on three countries with a large Muslim population: China, Indonesia and Pakistan. Representatives that had lived in each country stood at each booth, ready to share about their countries to any students walking through.

“Speaking as a former follower of Islam in a Muslim country, what I want others to get out of the event is to mostly be inspired and enlightened about the Muslim world,” said junior philosophy major Gavin Susantio, representative from Indonesia and member of Salam. “This [event] is just a glimpse of the world that has remained untouched by Christians, although this is a world [in Asia] where most Muslims abide.”
THE EVENT
Students set up the colorful booths at 3 p.m., beside a projector playing informational videos, similar to the structure of GSPD’s Wednesday Wakeups. Handmade posters with basic facts about each country dangled alongside photographs of each country. One table had a basket full of prayer requests for these countries. There were also snacks at each booth, including Indonesian cake, khatta meetha mix and jujube tea.

Representatives engaged students in conversations over the Koran, their stories from living in these countries and the different foods at each table. This combination of firsthand storytelling and shared food is designed to create fellowship between different cultures.

“The goal would be ‘treat Muslims not as projects, but as people’ and of course people are beings that have stories,” Susantio said. “Through food, through pictures, through music, through videos—it’s showcasing the Muslim life as a life of stories.”

Freshman human biology major Kendra Damaske said the event helped her realize that a person’s cultural background, as well as their religious background, should affect the way Christians reach out to them.

“Culturally, Muslims are different,” she said. “I think we have to always keep [culture] in mind, not just the religion.”
CULTURAL AWARENESS
Asia features some of the most densely Muslim-populated countries in the world. Indonesia has the highest at over 227 million, Pakistan follows at over 204 million and China contains over 24 million, according to World Atlas. Yet Susantio says that few Christians are aware of this.

Students said they came away from this event with a better understanding of other countries.