Students chill with Kevin Garrett at the Eddy

The first Eddy of the semester presented a relaxed atmosphere, talented student artists and Kevin Garrett. 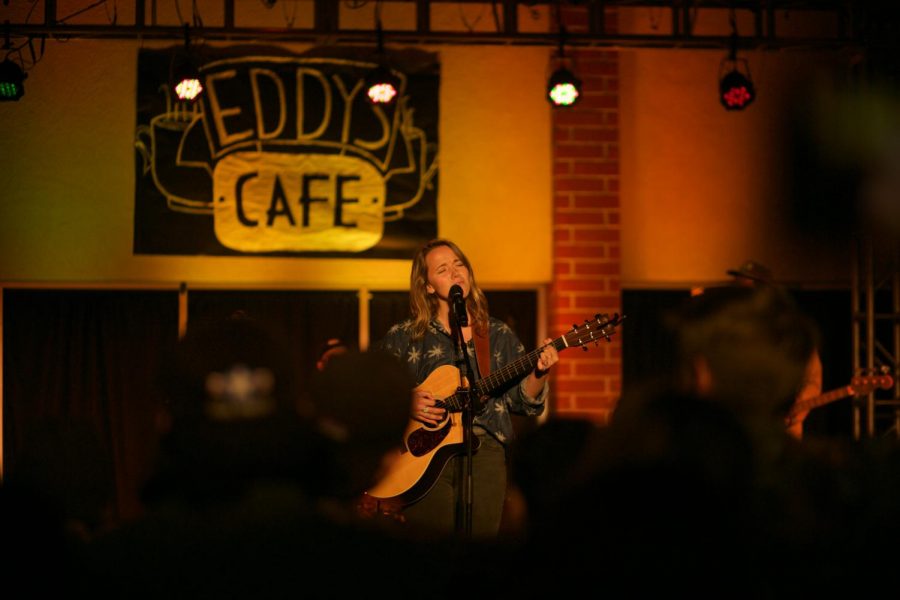 Why go out of your way to go to a coffee shop when you can go to the Eddy? Coffee, donuts and sweet, soulful music were the highlights of this semester’s Eddy, exuding a live coffeehouse vibe. Talented artists Boston the Girl, Isaac Escamilla and headliner Kevin Garrett took to the stage to entertain students to give them a fun, relaxing break from mid-semester stress.

COMFORTABLE ATMOSPHERE
Student Programming and Activities got creative and presented a cozy coffee shop atmosphere for this semester’s Eddy. A variety of Krispy Kreme donuts were set out for students to enjoy, as well as hot chocolate and coffee to provide warm relief from the chilly temps. Signs surrounding the stage and T-shirts worn by SPA staff read “Eddy’s Cafe.” The comfortable chairs set around the fireplace were a homey finishing touch. Students had the opportunity to participate in a raffle and win prizes throughout the show, providing an interactive experience. Student-run fundraiser Boba For Missions even made an appearance to the event, with a table set up in the back for students to enjoy a tasty drink during the show.
TALENTED STUDENTS
The night began with a lively performance from senior music worship major Boston Anderson, who goes by Boston the Girl, and her band. Boston performed original music and earned positive reactions from the audience. “Playing Back the Days,” released last May, was a special song to present, as the artist noted that it was written about Biola. The last song Boston played, which has not yet been released and does not yet have a title, reflects the artist’s personality through a balance of sweet and sassy lyrics. Boston enjoys the opportunity to interact and connect with the community through her performances.

“I always wanted my music to be a positive experience for people,” Anderson said. “I want to sing about the unspoken, and put words to feelings that you can’t really put words to.”

Sophomore music major Isaac Escamilla followed Boston’s stellar performance, bringing a soulful mixture of R&B and pop into the mix. According to Escamilla, who is new to the music world, this Eddy was his first-ever performance. One of the songs that he performed, “Still Missing You,” was his very first single released just days ago on Apple Music and Spotify.

“I produced it at home and I worked alongside my dad who’s also a studio musician, so he helped me and guided me in this process,” Escamillo said.

In addition to his latest single, Escamillo sang songs that he grew up listening to, such as “Vultures” by John Mayer and “Wake Up This Day” by Tom Misch. With inspiration from artists like John Mayer and Kevin Garrett, Escamillo hopes that audiences walk away from his performances with a greater openness toward R&B music. In addition, he hopes to continue to pursue music and create new songs in the future.
CHILL HEADLINER
Students were ecstatic to have Grammy-nominated singer Kevin Garrett conclude the delightful event. In contrast to the previous two artists who brought their bands with them, Garrett stood alone on the stage, equipped solely with a keyboard and an acoustic guitar. The audience was ecstatic to have him serenade them with his soft and beautiful voice. Garrett brought a wide variety of his own music to the table, including a track he wrote himself for Beyonce’s “Lemonade” album, titled “Pray You Catch Me.”

Garrett differed from the preceding artists by offering a much calmer and quieter presentation, relying solely on his vocals to carry his performance. His melodic voice blended with the sweet tunes of his instruments dazzled the audience with an enchanting act.

Students agreed that this semester’s Eddy was more mellow and relaxing than previous years’ Eddy’s, but not to a fault.  The soothing, groovy setting provided comfortable entertainment to the audience.

“I think Biola should do more events like this,” said junior public relations major Taylor Zaengle. “I think it’s fun to be social with everyone, and have good music in the background, and bring in cool artists like Kevin Garrett.”