For the first time in school history, the Eagles earned an at-large bid and will be competing in the Division II National Championships. 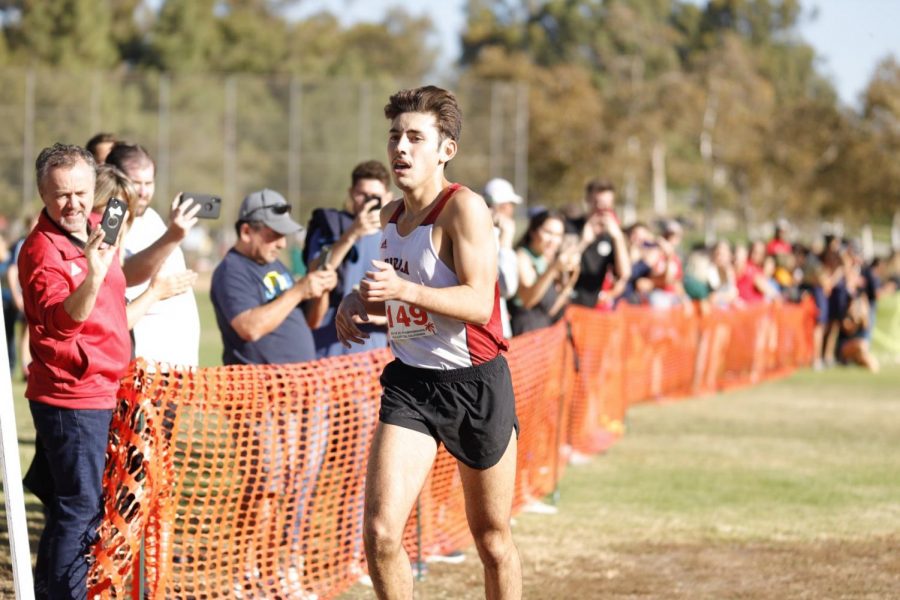 Senior long distance runner Gabe Plendcio strides through the PacWest Championships where he won the individual championship for the second year in a row.

Men’s cross country, back-to-back PacWest champions, returned home from Monmouth, Oregon, where they took sixth in the PacWest Regional Championship. While an impressive and promising placement for the Eagles, they were unsure if they ranked high enough to compete in the NCAA National Championships.

Two anxious days passed, while the NCAA committee discussed which borderline schools would earn a spot for each region. The day finally came, with Biola receiving an at-large bid to the NCAA National Championship on Saturday, Nov. 23 in Sacramento. No other team in school history has made it to a DII National Championship.

“It was an emotional moment, and I was filled with so much joy,” said head coach Sean Henning. “I was really happy for my guys, who have worked so hard to get to this moment and have truly shown godly character in the way they conduct themselves as student-athletes. They are deserving of this opportunity, and it was great to celebrate with some of them in my office.”

The Eagles have entered into the most elite level of competition, earning one of the 24 slots allotted for the entire country. Biola is one of seven universities representing the western region. The Eagles will go to battle with other well-respected schools from the west, including California Polytechnic University, Pomona, California State University, San Marcos, Chico State University and the University of California, San Diego.

“It was like waking up and realizing your dream is a reality,” said junior Ryan St. Pierre. “Reading ‘Biola’ among the list of schools that would compose the field of the teams competing was a fulfillment of two and a half years work.”
CHAMPIONSHIP MATERIAL
Senior Gabe Plendcio has been the leading man for Biola cross country. He has won the 2017 and 2018 individual title at the NCCAA National Championships as well as the 2018 PacWest Championship individual title. The highly decorated senior ran a 30:01 on the men’s 10k course during the regional championships last Saturday, earning fourth place overall.

“Running at regionals was a huge confidence boost for myself,” Plendcio said. “I bet on myself and threw myself into the fire with the top runners in our region. I told myself that I could run with those guys and that I was more than capable of winning the meet as well. I raced a way I never had before in terms of going out fast and leading the race from start to finish.”

For all but one athlete on the Biola squad, no one had been to a regional championship meet. The stakes were high, every school fighting and clawing for a spot in nationals.

“The atmosphere was like nothing I had experienced in my running career,” said sophomore Brady DeHaven. “This was the first NCAA championship race I had ever been apart of.”

The months of grinding paid off for the Eagles. Going into regionals, the team was seeking a third-place finish, and only earning sixth place overall provoked some initial sadness and worry. The good news came of the at-large bid and quickly turned the unstable emotions of the Eagles into joyful, determined athletes looking to crush the final big race.
LOCKED IN
Every year before the start of a new season, the Eagles head north to Big Bear, California, for a team retreat and training camp. The bonding experience for the boys allowed for them to place specific team goals that would be essential to their season’s success.

“The number one goal for us was to make it to Nationals,” Plendcio said. “Praise God that we accomplished it this year. We are very goal-focused and driven to work hard in order to better ourselves so that we can perform well for the team’s well being. We are intentional with our training and do what we need to in order to prepare ourselves for race day.”

The Eagles will have a little over a week to get their minds and bodies fully functioning and running on all cylinders for the Nationals. Henning is expecting nothing less than what he has already seen this season. He suspects his team to perform at the highest level by receiving All-American honors and a top-15 finish.

“I’m looking for them to run with passion, energy, excitement and a deep love and enthusiasm for what they are doing,” Henning said. “I don’t expect them to hold back. They will put themselves right up near the top section of the race and put it all out there.”

Having a coach so invested in his players, in turn, positively impacts the team’s work ethic and personal growth in faith.

“Coach Henning has played a huge role in our team’s success this year,” DeHaven said. “Much of our growth and success stems from what coach values, [but] ultimately our faith is the foundation, hard work, and the development of becoming mature young men that will help shape us for the future beyond running.”

The Eagles’ season isn’t over yet. There is still one last mission Biola must conquer before they can rest easy. Put aside the thrilling nature of Nationals and all that entails, the team knows that their time together is coming to an end. The comradery and leadership in the brotherhood is something that will have a lasting effect for the Eagles. All the laughs and goofiness the athletes share on mile-long runs are going to be missed.

“It is one of the best groups I have ever coached, and it’s the fastest in my book,” Henning said. “Wouldn’t want to coach another team.”