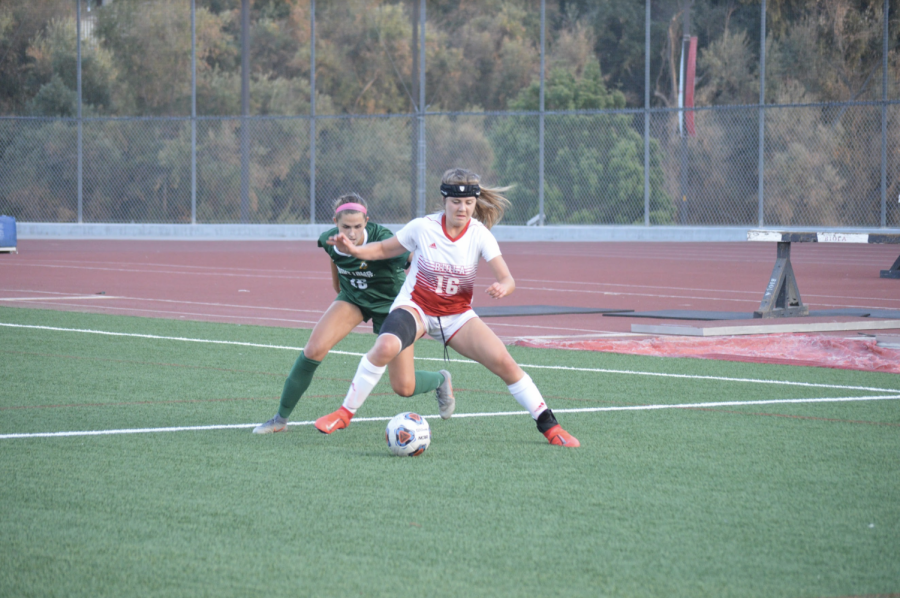 Women’s soccer played their final home game of the season at Al Barbour field on Wednesday night. The women’s soccer program celebrated 13 seniors at senior night as they took on Point Loma Nazarene University. After a tight game which included two overtime periods, the match ended in a 0-0 tie.
HIGH ENERGY START
The Eagles started out the match with high energy and a shot from senior defender Mady Brown in the sixth minute. Senior defender Colie Martin also put one on frame in the 35th minute. PLNU responded with a shot of their own and senior goalkeeper Christina Rodriguez tallied a save. The half ended 0-0 with a shot flying wide from Brown.

“This team has been such a gift,” said senior forward Sarah Yang. “I came to this team very distant from God and I’m leaving it a totally changed, reformed person. I’ve been able to transform my game, and when we say all for God we truly mean it.”

The second half looked a lot like the first, with both teams evenly matched across the pitch. Biola earned a corner kick early on but was unable to convert the attack into a goal. Rodriguez added another save in the 58th minute. The end of the half saw shots from senior forward Paula-Marie Labate and sophomore midfielder Katelyn Penner. With the score still tied 0-0, the game headed into a double-overtime period.
OVERTIME BATTLE
“Going into tonight, my one hope was that we would be proud of how we played after the game, no matter the result and I have never been more proud,” Brown said. “We just tied the conference champions.”

Senior forward Sarah Jeffries hit the only shot of the first overtime period in the 91st minute. PLNU added a corner kick but neither side was able to create a worthy chance in the box. The second overtime period saw shots from both sides, including Jeffries, Brown and freshman midfielder Halie Jamir. The final period ended and the match concluded in a 0-0 tie.

“Too many words for these seniors, but this group was, the majority of them were the first recruits I did as a head coach bringing them into the program,” said head coach Erin Brunelle. “They were the last group to play in the NAIA and helped us transition into Division II and to the PacWest. They set a standard and a legacy for teams to come beyond them to continue to be a top tier team in the PacWest.”

The Eagles (10-5-2) will play their final conference game against Fresno Pacific University in Fresno on Saturday, Nov. 16 at 5 p.m.