The Eagles lost a fierce five-set fight against Hawaii Hilo 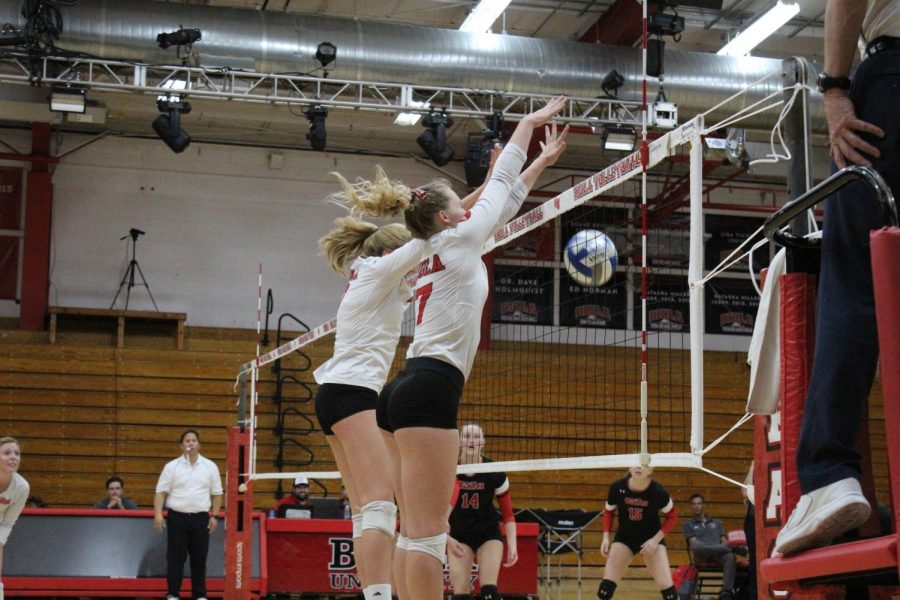 Biola volleyball put on a show as they seeked revenge on the University of Hawaii Hilo at Chase Gymnasium on Monday night. The Vulcans won 3-1 the first time they met this season, but the Eagles came ready to fight until the end this time. Freshman middle blocker Raegan Tjepkema had a standout night with 18 kills. However, a number of mistakes in the final set cost Biola the game, 3-2.
STAYING CLOSE
The ladies played a solid first four sets as the score bounced back and forth throughout most of the game. When Hawaii Hilo won set four and forced the final set, it looked like it was anyone’s game. The Vulcan’s quickly worked to create some distance between the Eagles. The Hilo lead grew to 10-6 as both teams raced to reach 15.

The Vulcan’s lead forced Biola to dig deep in order to produce more points. Tjepkema contributed a kill and two service aces. She was accompanied by a senior outsider Sabrina Winslow kill to get Biola back in the game, all tied up at 13 each.

The Eagles would not be successful in pushing through to score in the end as Hilo won this five-set thriller, 3-2. With this victory, Hilo sits in second place in the PacWest with a 14-3 record.
VULCANS PULL AWAY
The biggest turning point in the match came in the fourth set when Biola was up 21-19. A ball hit out of play and a late net violation by Biola brought Hilo back in the game to stun the Eagles and take set four, 26-24.

Biola notably had many standout blocks in order to keep them in the game throughout the five sets. Tjepkema led the team with 11 blocks and her kills performance was a season-best. The recently awarded PacWest Defender of the Week remained exceptional for the Eagles with 26 digs on the night.

Senior outsider Becca Branch also had an impressive night for the ladies with 14 kills and seven digs. Freshman setter Abby Brewster got in the mix with seven kills of her own, hitting over 200. All of the ladies were laying it all out on the court in each play.

“I think the positive thing is we did stay together the whole game and we fought together,” Brewster said. “No one really gave up. It was definitely not a lack of effort, it was just mistakes.”

Biola now drops back to 10-7 in the PacWest and 13-12 overall. The Eagles will host Hawaii Pacific University on Wednesday, Nov. 13 at 7 p.m.