Junior forward Jazz Benn led the offense with 16 points against the Golden Eagles. 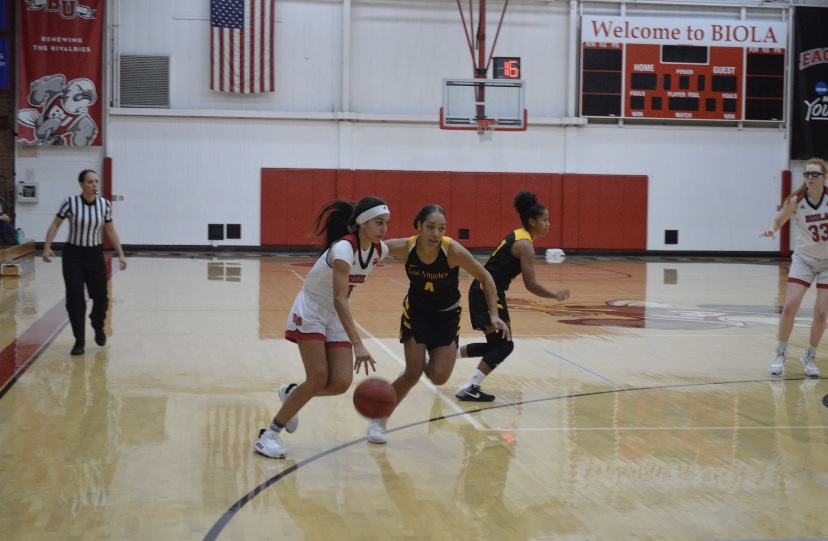 Women’s basketball played their home opener against California State University, Los Angeles Friday afternoon. Despite a close game led by junior forward Jazz Benn, the Eagles lost 72-67.
BENN KICKSTARTS OFFENSE
The Eagles struggled early on in the first quarter, down by nine points within the first three minutes. Benn was the first to put points on the scoreboard with a layup assisted by sophomore guard Danita Estorga. Estorga added two free throws and Benn another layup. The quarter ended at a competitive 15-12 in favor of CSULA.

“My teammates definitely help me out, the coaches help me out and you know get better and get off to a good start,” Benn said.

Freshman forward Jaden Randall and senior forward Mikayla Greens each made layups in the paint, making the score 17-16 at the start of the second quarter. Benn evened the score with a 3-pointer in the third minute making it 19-19. Benn picked up two rebounds at the end of the quarter and scored a layup off a fast break to make the score 29-25 in favor of the Golden Eagles going into the half.
EAGLES FALL SHORT
Sophomore guard Aysia Johnson started the third quarter with a layup, followed by a rebound. Just a minute later, Johnson scored a 3-pointer assisted by freshman guard Stephanie Lee. The Eagles began to fall behind at the end of the quarter, losing 49-40.

“I really appreciate our team, they’re very high quality young ladies, they really want to play like a team and they do everything they can to play for the Lord and each other,” said head coach Alan Nakamura. “Winning and losing doesn’t define us.”

Biola began to fight back in the fourth quarter as Greens added a pair of free throws to Lee’s 3-pointer, which put the Eagles less than 10 points behind CSULA. Johnson added a 3-pointer, assisted by Estorga. Estorga continued to push on offense, gaining two 3-pointers within the last two minutes. The Eagles fouled strategically, but in the end lost to CSULA, 72-67.

The Eagles (0-1) will be back out on the court at home on Saturday, Nov. 9 at 3 p.m. against California State University, Dominguez Hills.