Two veterans tell of God’s faithfulness through their experience in the military. 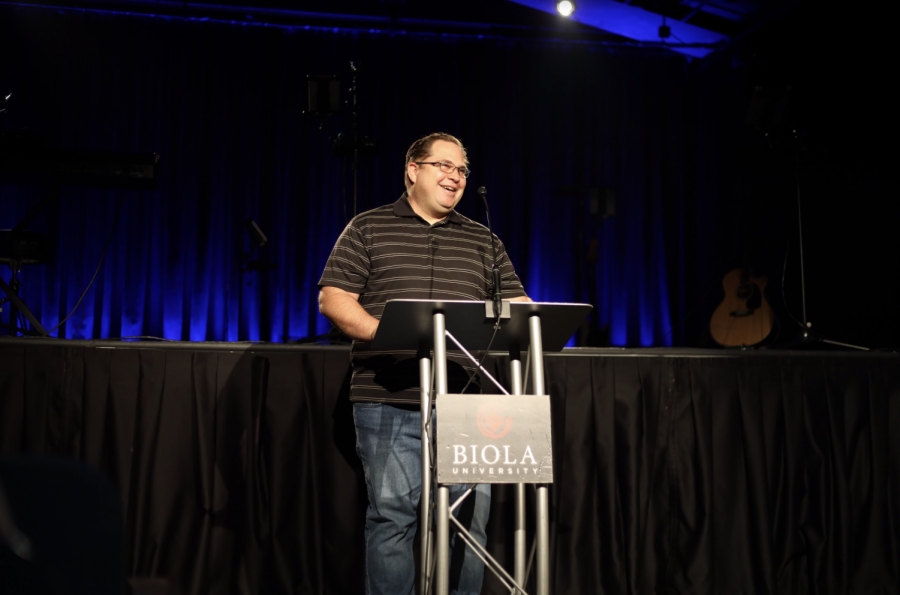 With Veterans Day just around the corner on Nov. 11, students gathered together this morning in Sutherland Auditorium to hear the testimonies of two veterans at the Image of God Veterans Chapel. The two veterans gave students a glimpse into their past and expressed hope for the future.
FOUCH’S JOURNEY
Pastoral care and counseling major Joshua Fouch served in the Army for 10 years. During the time of his service, he was deployed to Balad, Iraq for 400 days.

“I came to realize the type of environment I was living in very quickly. Especially when one day I found myself walking to the shower, and a mortar landed about 40-50 yards away from where I was at,” he said. “It became very real. But, over time, I became used to the heat, the attacks, the sandstorms. It all became normal.”

When he called home, he sensed things weren’t right. One day as he sat at his computer, he received information that his wife had been having an affair. He stood up at his computer in utter disbelief. He ran to the chaplain for help and later found himself in the Combat Stress Clinic.

“I’d be sobbing and calling out to God, and it felt like [my prayers] would go to the ceiling and come back down,” he said. “I felt so alone, so broken, so much pain. But I kept going. My faith told me that God does not leave me behind. He stays with me.”
THE ROAD BACK HOME
Fouch found support in his friends, chaplain and counselors on base. But the time eventually came for him to go home and re-enter civilian life.

“I was looking ahead and just thought, ‘What do I have?’ Everything I planned for and everything I built had been brought down. My life had to start all over again,” he said.

Fouch said he made the mistake of trying to be the same person he was before he left. His dad, a Vietnam veteran, called him one day and said, “So, what are you doing about the nightmares?” It was then Fouch realized he had to decide who he was now going to be. So, he decided to find a home church. It was there he became the youth pastor, and after years of searching for a job, he was encouraged to go to seminary. Now, he is attending Biola, working towards a degree in pastoral care and counseling.

“So I guess you can say that in this story, as hard as its been, as many things as I’ve gone through, God was with me the whole way,” Fouch said.
ABRAHAM LEE
In high school, Abraham Lee, who serves as the vice president of the veteran’s associations communications and programming, experienced major financial struggles. His father had gone bankrupt and was out of a job for two years. Because of this, Lee decided to join the U.S. Navy after high school in order to provide for his parents and two younger brothers.

Lee said the military revealed a lot of anger that resided in his heart. Not only did he face abusive coworkers and supervisors, but he also had to deal with turmoil at home. These burdens, according to Lee, made his three deployments very difficult.

After only two months of deployment, Lee lost three of his close friends. He knew their whole life stories, he worked 12-hour shifts alongside them and he had no chance to say goodbye. As time went on, he watched his fellow soldiers suffer from depression, all while he too was battling mental illness.

After his third and final deployment, Lee came home to a family of chaos. He was constantly working to make ends meet and was also pursuing a college degree. This caused him to become even more angry, leading him into a life of sin, according to Lee. After years of struggling, he finally looked to God for answers. This is where he found comfort and restoration through his faith.

“My name is Abraham and I was made in the Image of God,” Lee said.

For sophomore music major Natasha Berthelote, the testimonies were incredibly impactful for the student body to hear, especially in light of Veterans Day.

“I think that testimonies are really important, especially honoring Veterans Day. Just seeing these stories come from within our community is really cool,” she said.