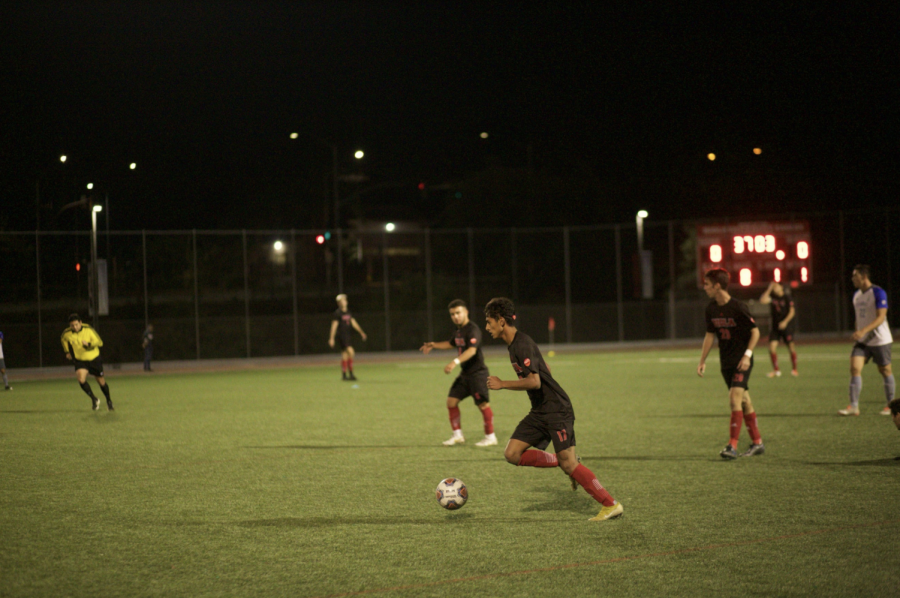 Sophomore Oscar Rubalcava dribbles the ball down the field.

The first half began quietly with a lone shot from sophomore midfielder Jonathan Serrano which went wide. At the 20-minute mark, the Cougars began to assert their dominance with a goal to make the score 1-0. Two minutes later, APU shot again and freshman goalkeeper JD Gunn made his first save of the night. The Eagles earned a corner to spur an attack in the 35th minute but APU won the ball and transitioned downfield for a corner kick of their own. The half ended 1-0 with a smattering of shots from Azusa off frame.
PENALTY LEADS TO LOSS
Gunn recorded a second save early in the second half as APU pressed the Eagles’ defense. Just 10 minutes into the half, Biola fouled in their own box, giving up a penalty kick and the second goal of the night. The Eagles attempted a response with a wide shot from sophomore forward Hann Kim. Azusa did not let up and added a pair of shots in the 68th minute, forcing yet another save from Gunn. APU added their third and final goal of the night in the 72nd minute. Biola was forced to adopt a defensive focus for the remainder of the game as the Cougars’ offense continued to pose a threat, winning 3-0.

Gunn recorded seven saves throughout the night, showcasing promising play within his first year on the pitch. The Eagles struggled offensively, logging just five shots and zero shots on goal.

The Eagles (6-6-3 overall and 4-2-2 PacWest) will be back out on the field Thursday, Nov. 7 at Concordia Irvine University.