Theatre 21 shoots for the stars with “Silent Sky” 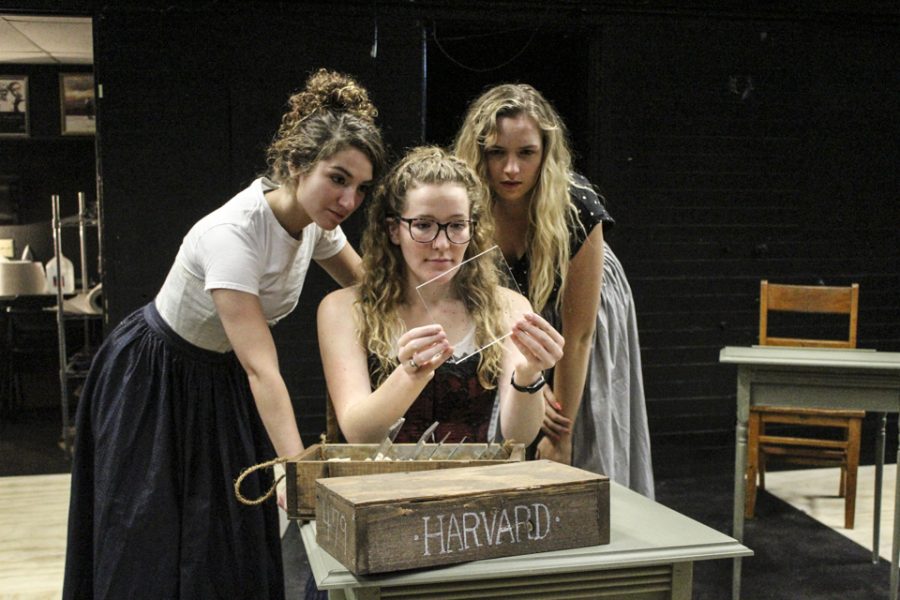 Themes of female empowerment and astronomical brilliance saturate Theatre 21’s production of “Silent Sky.” From its compelling storyline to its experimental setup, audiences can expect a thoughtful, entertaining production.
INNOVATIVE PRODUCTION
Similar to “Metamorphoses,” which was Theatre 21’s spring production from 2018, the production features a stage specifically designed for its storyline. With the stage set in the middle of an alleyway-like configuration, the audience will be able to sit on either side of the stage rather than the traditional stage-to-audience seating, allowing them to see different perspectives of the story. Director and assistant professor of theatre Zachary Bortot explained that the arrangement has been challenging since they need to block strategically, but both he and the cast have been willing to adapt to these challenges.

“You could come see the show a couple times and sit in different spaces, sit on different sides, and you’re going to get a little bit of a different story each time,” Bortot said.

With visiting assistant professor of communication studies Andrew Cole as technical director, Theatre 21 has the opportunity to experiment with new techniques, including the unconventional setup. The show will also present lights, projections and additional effects that have not been used in the theater before, providing the audience with an entirely new experience.
TIGHT-KNIT GROUP
“Silent Sky” features one of Theatre 21’s smallest casts, though not as small as last semester’s three-person production of “Eleemosynary.” The tiny cast of only five students adds a layer of intimacy to the production, as the entire group agrees that the small size leads to good chemistry, close relationships and treasured memories. Freshman theatre major Allyson Hoy, who portrays Williamina Fleming, especially appreciates the depth that comes from the small cast size.

“That’s a reason why I love small casts because it’s so much more intimate,” Hoy said. “With a show like this, I really feel like the characters need to have chemistry with each other. They need to know each other inside and out.”

The cast hopes that audiences will walk away from “Silent Sky” with a lesson from the story and a deeper appreciation for theater. Their desire is to invoke laughter, tears and a thirst for more stories like these, with an uplifting message of perseverance and high aspirations. Junior theatre major Hannah Hines, who portrays Henrietta Leavitt, hopes the audience walks away encouraged and inspired.

“I think one of the biggest things Henrietta learns is that she’s a part of something bigger,” Hines said.

POWERFUL MESSAGE
Senior psychology major Madison Britton, who is the production stage manager, is excited to collaborate with Bortot in bringing “Silent Sky” to Biola, promising a well-written story, a relatable message and something for everyone to enjoy. The true story of Henrietta Leavitt, a brilliant astronomer who fought to have her work recognized at Harvard Observatory, is one that demonstrates the power of redemption and hope.

Bortot’s takeaways from the show include remembering that God is good in the midst of trials, learning to live in the moment and appreciating the opportunity to work with an incredible cast and crew. He said the main point of the show is summarized in a snippet from Henrietta’s lines.

“I used to think that to be truly alive I needed answers. I needed to know, but all this does not, in fact, need to be known, does it? We do. Because the real point is seeing something bigger and knowing we’re a small part of it if we’re lucky. In the end, that is a life well-lived.”

Ticket prices for “Silent Sky” start at $8 and can be purchased online. Showtimes will run until Sunday, Nov. 17.