Student workers given new jobs after grounds crew gets outsourced

Grounds crew will be handled by a company named BrightView, moving student workers throughout facilities management. 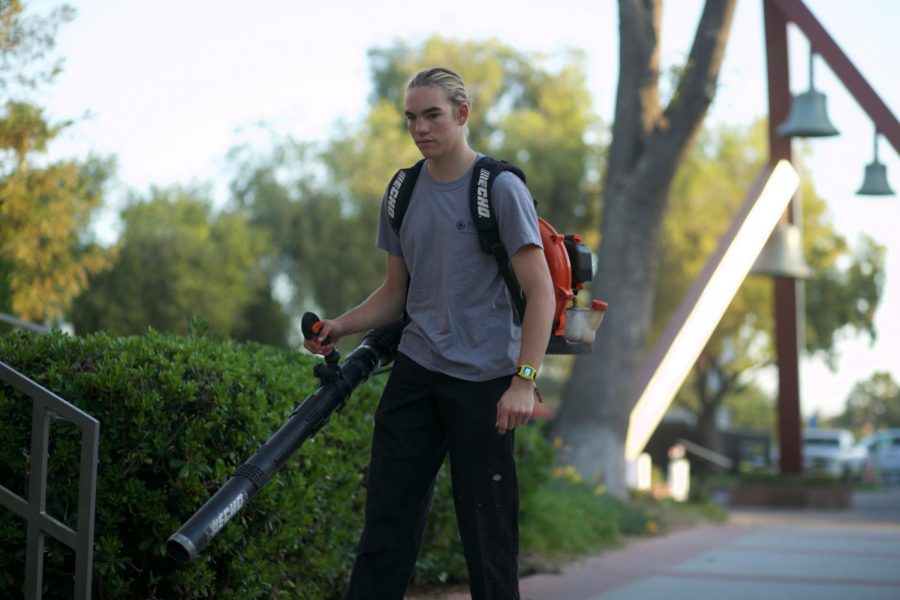 Sophomore Kinesiology major Evan Peters works a morning shift with a leaf blower - a shift he will not have for long.

At 6 a.m., as the sun rose, senior business major Harrison Langer would begin his day as a grounds crew worker. Most mornings he would lug around a heavy leaf blower to clean the campus of debris. Other days, he traded his leaf blower in for some pruning shears to trim trees. The day always ended with him emptying outdoor trash cans. Langer is one of six students who work for the grounds and landscaping crew—at least for now. A few weeks ago, Langer received a text message from his supervisor, notifying him that the grounds and landscaping crew was being cut by the end of the month due to outsourcing.

“I was notified by my supervisor via text that there would be changes coming to how grounds was done at Biola,” Langer said in an email. “I was eventually let know that student workers would officially be cut from grounds in a group text.”

Effective Nov. 1, Biola will relinquish landscaping responsibilities to BrightView, a company with 80 years of experience in commercial landscaping. Seven full-time staff members of the grounds crew, along with six student workers, lost their jobs due to this decision. However, BrightView offered all seven staff members jobs at their current pay rates, and they will continue to work on Biola’s campus, according to Associate Vice President of Facility and Auxiliary Operations Brian Phillips.

“This decision was very difficult. It was made with a great amount of prayer and consideration over many months,” Phillips said via email.

“This decision is in no way a reflection of their work or performance.”
WHAT ABOUT THE STUDENTS?
Student workers were offered a variety of jobs on campus in either custodial, construction or maintenance with accommodations to their current schedules and pay rates. Biblical and theological studies major Timothy Seminoff, who is among the affected student workers, explained that though the cut came quickly, Biola helped him find a new job just as fast.

For Seminoff and Langer, the decision to outsource is an honorable one, since Biola not only kept the student dollar in mind, but also compensated those who lost jobs with new ones.

“I personally do not mind Biola’s decision to cut groundskeepers. It is crucial for a small school like Biola to save money and use income wisely,” Langer said. “If outsourcing does that well and efficiently [then] I agree with the decision.”
LOOKING OUT FOR THE STUDENTS’ DOLLAR
This is not the first time Biola has outsourced work to outside companies. Bon Appetit, the university’s food service provider, has been working with Biola for decades. Phillips explained that outsourcing is a way to accommodate to the university’s declining enrollment rate.

“We are always looking for ways to reduce and control costs, knowing that increases in operational expenses have a direct impact on student tuition,” Philips said. “In recent years, declining enrollment has resulted in budget reductions and most of the reductions in Facilities Management have been met through reductions in staff.”

Phillips assured that there are no further plans to outsource within the facilities department, however, the fate of other departments was not mentioned.
GRATITUDE FOR THE GROUNDS CREW
Vice president of business and financial affairs Michael Pierce, who sent out the original email regarding the decision to outsource, expressed his gratitude to the grounds crew, ensuring that they will continue to be a part of Biola’s future.