The Eagles dominated the leaderboard with multiple first-place finishes. 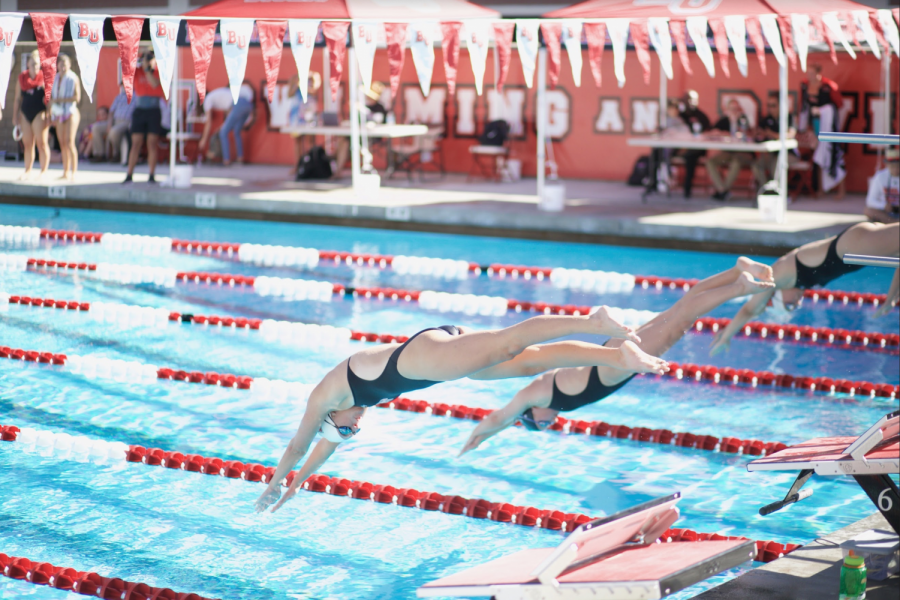 The women’s swim and dive team took on rivals Azusa Pacific University at the Lansing Pool on Friday afternoon. Biola ended the nine swimming events with a lead against APU, 114.89.5. The Cougars had an early 17-point lead over the Eagles in the first three events. However, Biola gathered themselves and won the following six events to give them the overall lead.
LEADING EAGLES
Freshman Ashley Vitale led her Eagles alongside freshman Chole Hartman, who finished in respective third and fourth places and both ended their one-meter races with season bests. Vitale came to her third-place finish at 184.95 in the three-meter and 224.60 in the one-meter. Hartman ended the afternoon at 174 in the three-meter and 223.30 in the one-meter.

The 200 butterfly was all Eagles. Sophomore Faith McAllister finished in first with a time of 2:14.44. Senior Rachel Stinchcomb followed right behind McAllister placing second, 12:15.20. Freshman Anna Cohee rounded out the group, finishing in third with a time of 2:15.47.

“It’s so nice to see us all just come together and all just get loud and cheer,” Stinchcomb said. “It has been really exciting to see how stacked up we are, how deep our team really is.”
BIOLA BREAKING LEADERBOARD
The 100 backstroke was dominated by sophomore Nicole Chang and freshman Kolya Vos. Chang won the race at :59.71 while Vos placed second at 1:01.33. Freshman Liza Parahnevich won the 200 freestyle and 400 individual meets at 1:56.79 and 4:33.44.

“It was an even better outing than I ever even imagined,” head coach Ryan Kauth said. “I knew that we would be really competitive, the format of the events allowed us to play to our strengths. It was a different mentality for the women’s team, they just came out prepared mentally and that is something I give them credit, they really went after it today.”

The Eagles will return to the water on Saturday, Nov. 2 at 10 a.m. for round two against APU in Azusa, California.