Although aggressive and active, Trump’s foreign policy has been largely ineffective in accomplishing America’s goals. 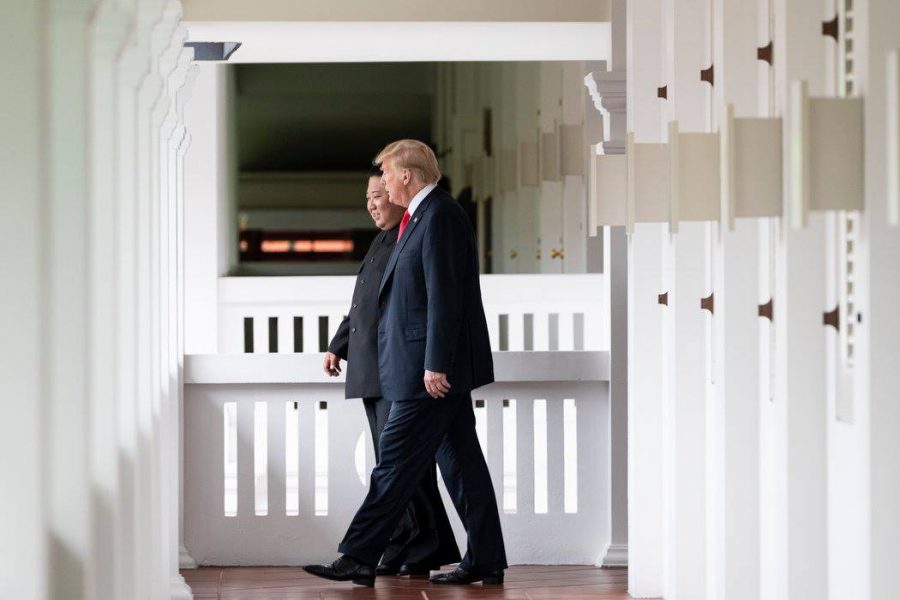 President Trump's aggressive approach to foreign policy did not result in positive relations with North Korea.

Anyone entering national politics inevitably has a plan to fix foreign policy for good, and everyone inevitably either gives up or fails to achieve their goals. Foreign policy is as complex as it is fun to talk about, and every sitting president has left his mark on America’s policy decisions. Some have records that are certainly praiseworthy. Then-President Eisenhower helped win the Second World War and helped broker a global peace that has lasted over 70 years.

However, not all presidents have been successful in handling America’s relations with other countries. President Trump may not have the worst foreign policy record, but it is certainly not the best, or even in the upper half of presidents before him. Trump’s foreign policy approach is characterized by aggression and shows of force, which have more often than not been either ineffective or detrimental to America’s interests abroad.
North Korea
North Korea has posed a significant threat ever since its establishment at the end of the Korean War, according to the Council on Foreign Nations. President Trump entered this delicate situation with his typical reckless brashness, saying in an interview with the UK Financial Times, “If China is not going to solve North Korea, we will. That is all I am telling you.” Trump continued in this manner, using aggressive policies and harsh rhetoric whenever possible in his dealings with North Korea. In his first speech to the United Nations as president, Trump said that the U.S. would “totally destroy” North Korea if it proved to be threatening.

This happened in the wake of a North Korean missile test passed over Japan to land in the Pacific Ocean, a direct violation of multiple cease-fire agreements. Trump promised a de-nuclearization of North Korea in the short term, and possibly even a deconstruction of the state in the long term, but has yet to deliver results in either field. Trump’s aggressive approach has accomplished no more than then-President Obama’s gentle approach, so we must call this a loss for the Trump foreign policy record.
Syria
The Middle East has been a global hotspot for violence and political interest for centuries. There are numerous reasons for this: arbitrary nation borders were drawn without regard for ethnic or cultural groups, religious wars, oil or foreign meddling, all merits of these explanatory factors. Regardless of the cause, a keystone of any American president’s foreign policy is how they choose to deal with the constant conflict in that region.

President Trump’s decisions, especially regarding Syria, have been less than ideal. In April of 2017, in response to Syrian President Bashar al-Assad using chemical weapons to gas his own people, President Trump authorized targeted missile strikes against military bases where the chemical weapons were believed to be stored. Trump also green-lit more strikes in 2018, with much the same result.

However, nothing has changed in the region. Assad is still in power, Russia is still meddling and the Kurds are still being massacred. There is a similar problem here to the situation in North Korea. Trump’s aggressive tactics may look flashy and may create plenty of material for late-night talk shows, but they accomplish nothing more than inaction would have.
The European Union and NATO
Conservatives typically take a more isolationist approach to foreign policy, preferring to leave other countries alone and be left alone in return. This may have been a viable approach in the past, and it certainly still is at times, but in the modern age this strategy is becoming increasingly outdated.

In this day and age the world is getting smaller and smaller, and every country—especially the powerful ones—has an increasingly important responsibility to pay attention to its neighbors. Historically, the U.S. has spent far more on military spending than any other nation. This is not because of the U.S.’s love for war but rather because they prioritize the extra expenditure on defense so that other countries do not have to. This arrangement has worked out very well for the last 70 years or so, and there has not yet any good reason to change it.

President Trump has spoken out many times against high U.N. spending, as well as high NATO involvement. This may seem like simple rhetoric, but it sets a dangerous precedent.

Trump’s foreign policy has been characterized by populism and aggressive tactics. Spokespeople from the Trump administration would say that Trump’s significant efforts are reason enough to support his positions. Unfortunately, it does not matter what a politician meant to accomplish. All we should care about is what they actually did. When it comes to foreign policy, Trump lives up to his reputation: a lot of hot air and very little smart policy.