Men’s soccer adds another win at home against Chaminade

Sophomore Jack McDonald scored the lone goal for the Eagles. 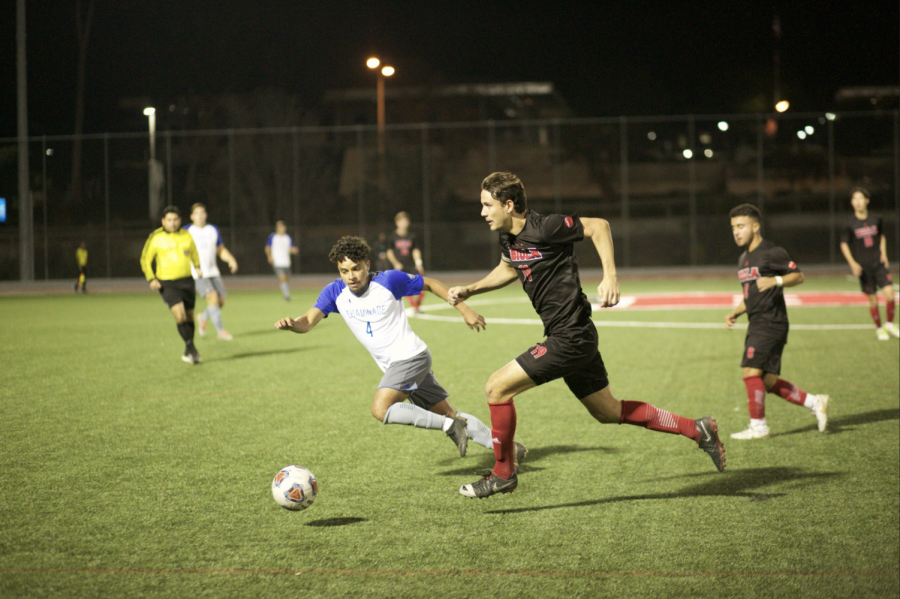 Senior defender Jake Munivez races to the ball against his opponent from Chaminade Hawaii University during their game on October 31, 2019.

Men’s soccer looked for another win at home against Chaminade University of Honolulu Thursday at 7 p.m. The Eagles carried high energy from an overtime win against Hawaii Pacific earlier in the week.

The Eagles started slow in the first half, conceding two shots within the first five minutes to Chaminade. Freshman goalkeeper JD Gunn tallied a save before Biola transitioned to the attack. Ten minutes later, freshman Jack Kilgallon took a shot only to be blocked by the Silverswords keeper.

The Eagles earned several exciting corner kicks in the 23rd minute and sophomore midfielder Oscar Rubalcava added his second shot of the night. In the 36th minute, Rubalcava continued to pepper the Chaminade goalkeeper with shots, forcing a diving save. Sophomore forward Hann Kim added another look at the net for Biola at the end of the half, but the game remained tied 0-0.

“This is our second to last home game and we are trying to maximize our points here at home because we have tougher games ahead,” said head coach Todd Elkins. “We’ve struggled to string together wins so this is really important.”

Biola began the second half with two runs into the attacking third from senior defender Hunter Finnegan and junior forward Jack McDonald. Chaminade replied with a shot inches wide of the left post in the 53rd minute. Kilgallon received the ball in the left corner, almost 10 minutes later, and crossed to McDonald. McDonald volleyed the shot and hit the crossbar, Chaminade’s keeper caught the rebound.

Biola had another close chance with 12 minutes to go when sophomore midfielder Jonathan Serrano played the ball across a crowded box to the head of freshman midfielder Chad Sinclair. The disappointment was short lived as McDonald dribbled into the box and finished a shot to the lower left corner to make the score 1-0. The Silverswords added a shot during the last minute, only to be saved by Gunn.

“I have to finish this, we just need to put it away. We keep getting a lot of chances and someone just needed to put it in,” McDonald said.