Health care should be a personal choice

Although Medicare for All can help many, citizens should still be able to choose their health care options. 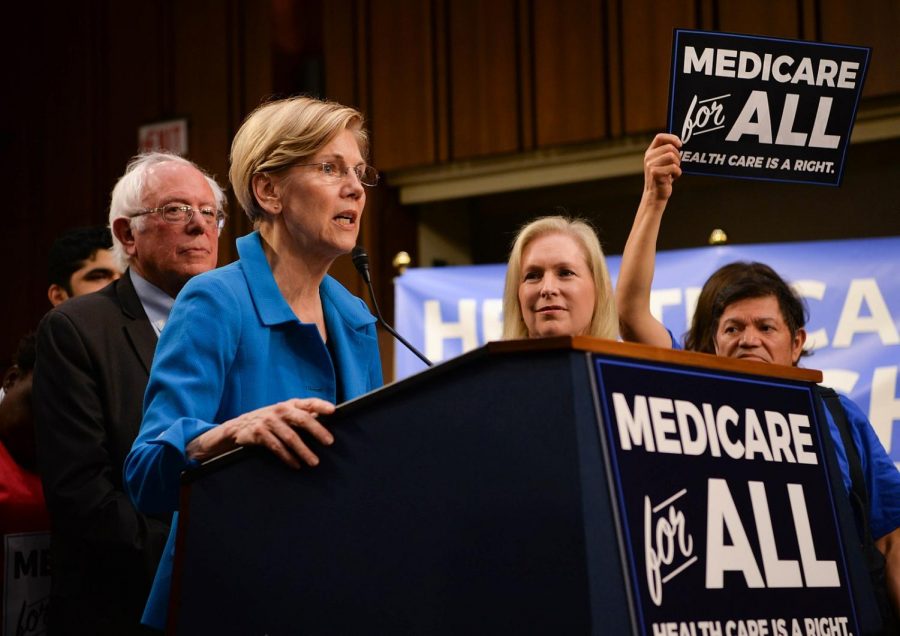 As the 2020 presidential election creeps closer and closer, the candidate field continues to shrink, and the debates between the remaining contenders grow ever more heated. One of the most consistently debated topics is health care, specifically where each candidate stands on the idea of Medicare for All. Of the 20-odd campaigners left on the trail as of now, here are the plans for each of the top 6 polling candidates.
MEDICARE FOR EVERYONE
Health care proposals can be split into three overall categories: Medicare for everyone, Medicare for anyone who wants it, and the Affordable Care Act. Massachusetts Sen. Elizabeth Warren and Vermont Sen. Bernie Sanders fit into the first category. Both candidates propose a system that abolishes private insurance and replaces all medical insurance options with a mandatory enrollment, government-run system. Not only that, but under this proposed system all doctors will be employed directly by the government, and drug development and manufacturing will be heavily regulated to control cost, according to Warren’s website.

Sanders and Warren have both shown support for these elements in their proposals, but Warren adds an additional requirement for health insurance providers to cover mental health and treatment. The goal behind this overall approach is to eliminate the difficulties many Americans face when navigating the health care insurance system. Ideally, everyone will have access to exactly the same care whenever they need it or want it.

There are two major problems with this approach. First, it removes any incentive for improvement. Without the pressure of free-market competition, a single government-run health care provider would quickly stagnate and its care quality would decline. For proof of this, look no further than the state of other government-run public good agencies. The DMV, IRS or any other massive program run by the government has inevitably shown to be inefficient, ineffective and ridiculously slow.

Secondly, it removes an entire industry from the American economy. Half a million jobs are rooted directly in the health care industry, not to mention caregivers and other tangentially related professions. Outlawing private insurance could make all of these people criminals and significantly impact the U.S. economy negatively.
MEDICARE FOR THOSE WHO WANT IT
The second category, Medicare for those who want it, contains three other candidates: South Bend, Indiana Mayor Pete Buttigieg, California Sen. Kamala Harris and entrepreneur Andrew Yang. All of these candidates have expressed a desire to keep private insurance an option, but also provide a government-run universal healthcare option.

In addition to providing health care, Yang has presented a proposal that appears to be unique among the candidates. He suggests putting doctors on a salary system at the hospital where they work at as opposed to a paid-per-patient system. This would limit the incentive of doctors to rush through visits to see as many patients as possible, without lowering the overall monetary gain they receive. This policy umbrella is much better than the first because it allows Americans to choose the health care option they think is best for them and their families, and not the policy that the government has decided is best.
OBAMACARE
Lastly, there’s former Vice President Joe Biden who advocates to keep the Affordable Care Act in place. “Obamacare” is not a Medicare for All policy, rather, it stands as a backup for those who cannot afford private health insurance. Along with protecting Obamacare, Biden hopes to expand its coverage while also reducing costs.

Biden has proposed additional measures, including a drug price control of his own, and to simplify the overall system and provide additional tax breaks for low-income families who do not quite qualify for government assistance with health care.
AMERICANS NEED CHOICE
To turn health care from an individual choice into a government-determined mandate is a dangerous precedent. The more that America forces citizens to depend on the government, the less control they have over their own lives. Putting health care under the control of the government would only result in unnecessary chaos and confusion, and would cause health care to be administered with little organization. Because of this, health care must be an individual choice.