Just seven miles from campus, the Fullerton Fire was one of multiple fires that ignited this week throughout Southern California. 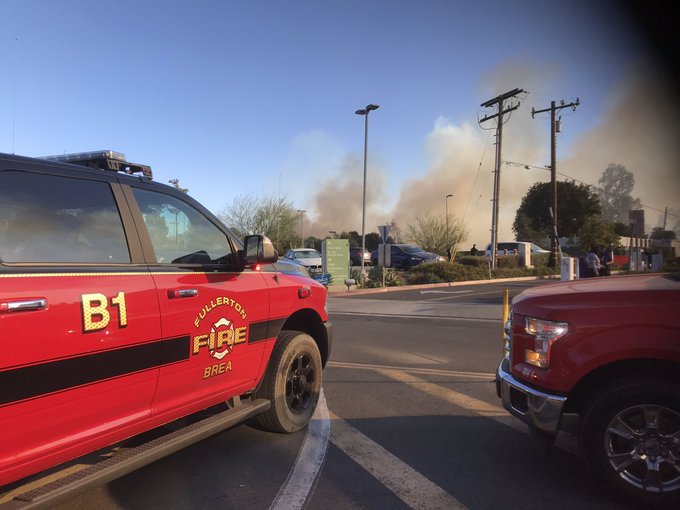 After a fire broke out at the Brea Dam in Fullerton on Wednesday evening, fire crews stopped the fire’s progress at under two acres, Fullerton Police said. Per the Orange County Register, Fullerton Fire Division Chief Kathy Schaeffer said the fire burned “one to two acres of light brush near the 1700 block of Harbor Boulevard.” The fire in Fullerton was seven miles from Biola’s campus, about a 15-minute drive.

At 4:01 p.m., the Fullerton Police Department tweeted that a brush fire started and advised locals to avoid the area. At 4:11 p.m., they followed that tweet with another that announced the closure of Harbor Boulevard in both directions from Brea Boulevard to Bastunchary Road.

At 5:04 p.m., police announced that the fire was under control and will no longer spread.

The Fullerton Fire is now under control. The forward rate of spread has been stopped. Crews currently “mopping up” and we will report containment percentage shortly. The cause of the fire is under investigation.

FIRES RAGE THROUGHOUT SOCAL
The Fullerton Fire was just one of the multiple fires burning throughout Southern California.

The Brea Fire broke out on Wednesday in Diamond Bar but was controlled at 16 acres at around 2 p.m. The fire broke out at Brea Canyon Road, which is 15 miles from campus, a 40-minute drive.

BRUSH FIRE *Update* #DiamondBar I The #BreaFire forward progress has been stopped at 16 Acres. Out of Unified Command & Orange County resources being released. Mop-up in progress. Thx for the help @OCFA_PIO & @FFALocal3421 #lacofd

The Getty Fire is burning near the Getty Center in Brentwood, which is 35 miles from campus or about an hour’s drive. So far, the Getty Fire has burned 745 acres and is 27% contained.

The Easy fire ignited Wednesday morning in Simi Valley, which is northwest of Los Angeles County, about 70 miles. It has burned 1,400 acres and about 7,000 homes are on evacuation notice.

The Mureau Fire stopped at about 10 acres in Calabassas. The fire ignited Wednesday and the Los Angeles County Fire Department announced its stoppage around 11 a.m.

The Hill Fire broke out in Jurupa Valley in Riverside County, 30 miles east of LA County. As of 4:15 p.m., the fire has burned 250 acres and is 5% contained. CalFire Riverside tweeted that the forward rate of progress of the fire has been stopped.

Los Angeles County is still on an extreme red flag warning as the Santa Ana winds continue to blow throughout Southern California.