Eagles pick up their third win in the PacWest conference. 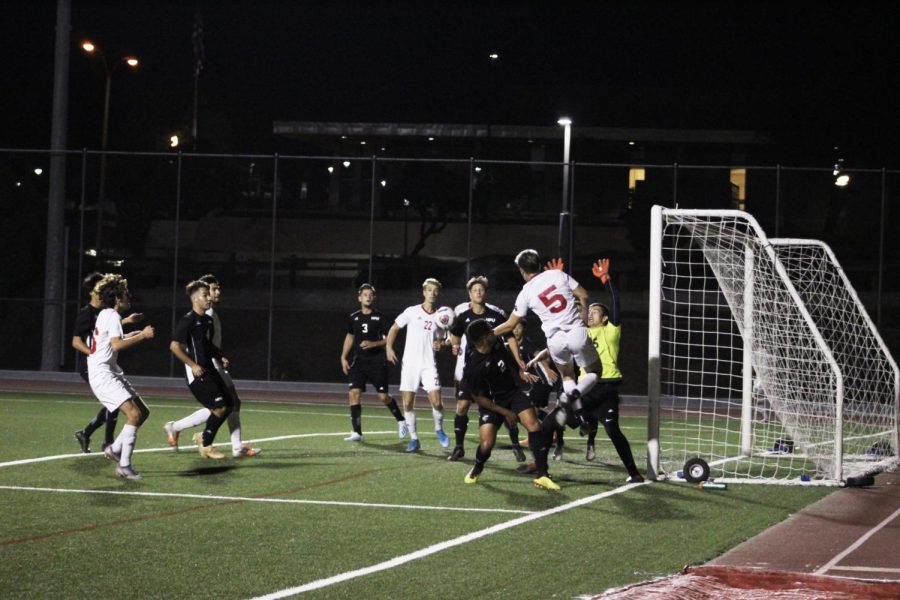 Men’s soccer lost for the first time in the PacWest conference to the University of Hawaii Hilo last week and looked to bounce back with a win. The Eagles and the Hawaii Pacific University Sharks both scored one point in the first half but neither team could come out with a second point in the second half, forcing the game into overtime. Biola scored in overtime, winning their third game in conference play, 2-1.
ROUGH START FOR EAGLES
The Eagles struggled to attempt shots on goal by kicking only four shots, including one close shot by senior forward Leo Thompson that was saved by the Sharks goalkeeper in the first few seconds of the game. Biola fell short on defense to one goal by the Sharks a few minutes into the first half. After a foul on sophomore midfielder Gio Passarelli, the Sharks missed a freekick and quickly returned to the goal by kicking the ball low to the right of the goal, past freshman goalkeeper JD Gunn.

Biola picked up their first goal of the game late in the half. Senior forward Hunter Finnegan collected the ball after a corner kick and passed to junior forward Jack MacDonald who kicked the ball low to the left of the goal, earning his third goal of the season. The Eagles looked to grab one more point before halftime but could not come out with another shot attempt before the buzzer.

In the second half, Biola came out on fire by picking up 10 shot attempts to the goal. Gunn also collected five close saves. Both the Eagles and the Sharks tried to grab the winning goal in the half, but came out tied 1-1 at the end of the half.
EAGLES WIN IN OVERTIME
Four minutes into overtime, the Eagles picked up a winning goal. Finnegan marked his fourth assist of the season by throwing long to sophomore midfielder Jonathan Serrano who kicked to the center of the goal, earning his first goal of the season and a victory for Biola by a final score of 2-1.

“Coach wanted to end it quick, so it came to me and I just put my foot through it,” Serrano said. “We came out strong,…we touched the ball good, we played good, we all got the result we wanted.”

Overall, MacDonald led the Eagles by five shot attempts to the goal and Gunn collected six saves throughout the game.

“I think its been probably the third game in a row where we forfeited a lot of chances but did not up until that point have a winning goal,” said head coach Todd Elkins. “We said before the game, the hardest opponent is the opponent that has nothing to lose so we have to play like we have nothing to lose.”

The win moved the Eagles to 3-1-2 in conference play and 5-5-3 overall. They will play at home against Chaminade University of Honolulu on Thursday at 7 p.m.