Eagles lose to the Vulcans in PacWest conference play, 2-1. 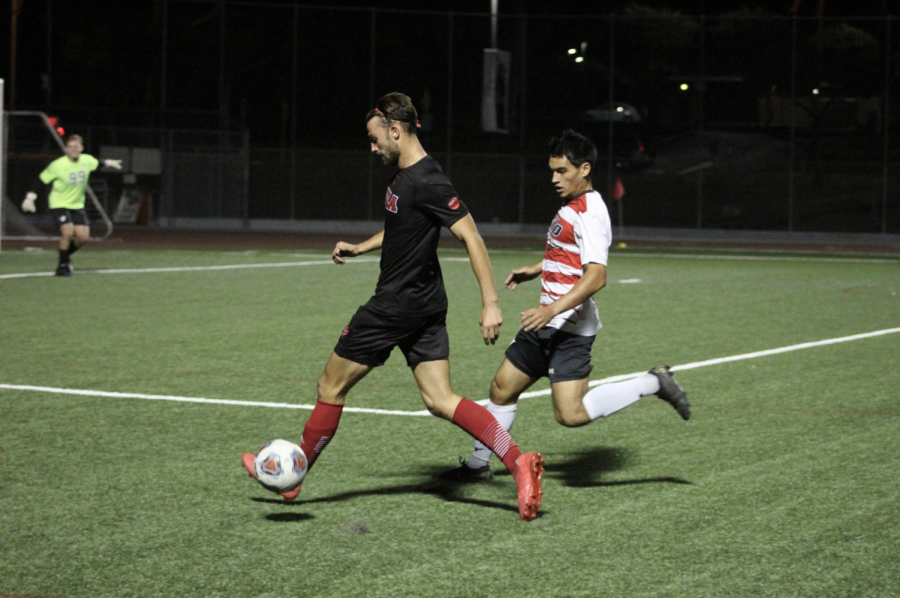 Senior Leo Thompson dribbles the ball towards the goal.

Men’s soccer dropped a PacWest conference game against the University of Hawaii Hilo Vulcans on Saturday night. The Eagles were off to a good start by scoring their first goal in the second half. Shortly after, the Eagles fell short two goals by the Vulcans at the end of the game, resulting in a 2-1 loss.

In the first half, the Eagles attempted 13 shots to the goal and five corner kicks. Sophomore midfielder Oscar Rubalcava and sophomore forward Hann Kim each kicked a close shot to the goal, which was saved by the Vulcans’ goalkeeper.

The Eagles won their first and only goal of the game within six minutes of the second half. Freshman midfielder Jack Kilgallon collected a loose ball and ran with it down the field. He crossed to Rubalcava, who scored and marked his first goal of the season.

“Finally got my first goal of the season. It’s just a great feeling when you score a goal,” Rubalcava said.
EAGLES FALL TO TWO GOALS
Shortly after, the Vulcans grabbed their first goal by shooting the ball toward the middle of the goal. The Eagles attempted five more shots before the Vulcans won their second goal in the last two minutes of the game by a corner kick that was headed by a Vulcan.

The Eagles were in hopes to move the game into overtime by attempting one last shot to the goal. Senior defender Axel Van Cleve attempted the Eagles final shot but fell short by a save from the Vulcans goalkeeper, ending the game by a final score of 2-1.

“We probably needed to push a little bit harder for a second goal. It could’ve ended as a tie but even then, we needed to extend that lead,” said head coach Todd Elkins. “Our goal would be to bounce back and play harder.”

Overall, the Eagles came together to work for a win but ultimately fell to the Vulcans. Senior forward Leo Thompson and Rubalcava each attempted five shots to the goal. Freshman goalkeeper JD Gunn also collected four saves overall.

The loss moved the Eagles to 2-1-2 in conference and 4-5-3 overall. They will continue to play at home against Hawaii Pacific University on Monday at 7 p.m.