After a tough match, the Eagles won 1-0 at home, earning them seven consecutive wins. 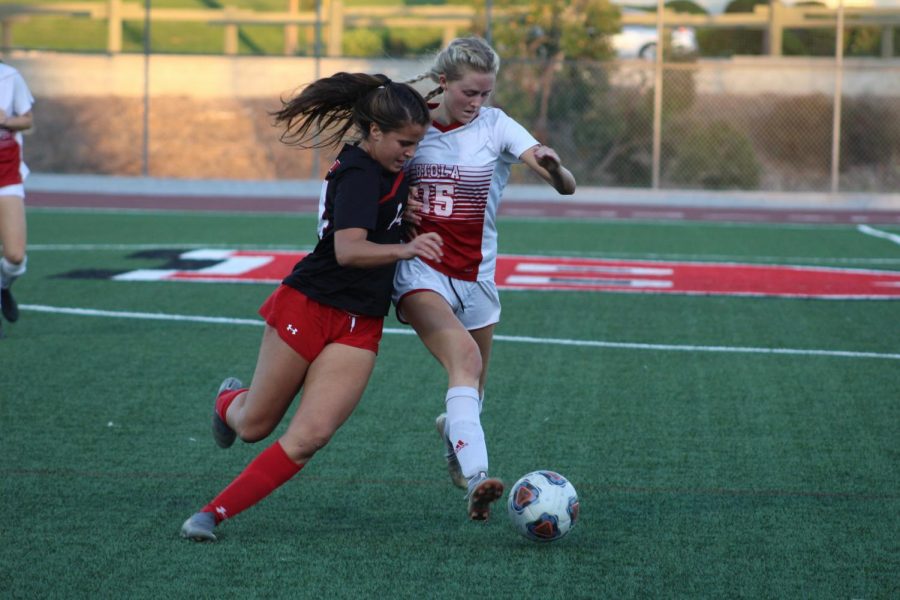 Senior Collie Martin tries to steal the ball from her opponent.

Women’s soccer managed to bring their win streak to seven after they beat Hawaii Hilo at home. The game was tough, but sophomore midfielder Katelyn Penner rose to the occasion, scoring the sole goal for Biola.

Senior defender Colie Martin felt the pressure as soon as the clock started, trying to score a goal less than a minute into the game. The tone for the game was set, as the rest of the team tried their best to score. Freshman forward Christine Goodman shone with her attempts to assist and score a goal in the first half.
SECOND HALF RECOVERY
Penner was determined and scored a goal less than three minutes into the second half. The team was encouraged to keep pushing, though no more goals were scored. Hawaii Hilo posed a good threat for Biola’s soccer team, pushing them to perform as well as they could.

“They were definitely really good competition,” Goodman said. “As the conference goes on the teams are getting harder and harder, so good competition for us, but good preparation for Monday’s game.”

The lady Eagles continue to push themselves harder to always bring a win home. Head coach Erin Brunelle believes that their preparation and hard work has earned them the seven-win streak.

“Something that they bring to every practice session and every game is that willingness to work for each other and it’s showing in the games,” Brunelle said.

The Eagles (8-3-1 overall, and 5-0 in PacWest) will be back out on the field on Oct. 28 against Hawaii Pacific at Al Barbour Field.