Gavin Susantio, aka Moonwalker, took first place out of the nine performing teams with his Michael Jackson impression. 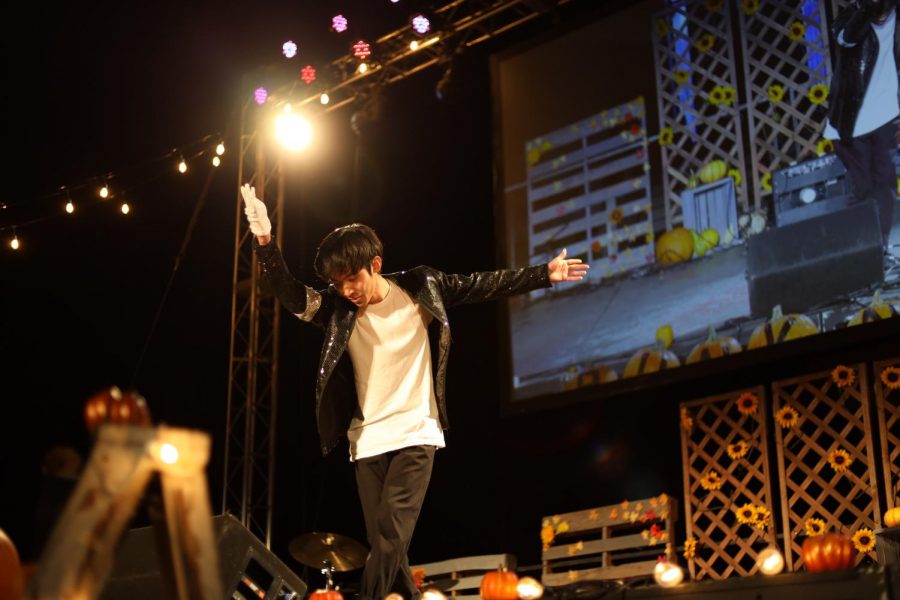 Lights illuminated the stage with orange and red hues as students and their families huddled together on Metzger Lawn with blankets and pillows, eager to watch the performances of the annual Punk ‘n’ Pie talent show. Students of many talents entered the contest bright-eyed and hopeful, ready for their hard work to pay off. The performers were judged by Student Programming & Activities Office Coordinator Gabby Morris, Campus Safety Chief John Ojeisekhoba and associate professor of marketing Laureen Mgrdichian.

A TOUCHING START
The first performance of the night came from sophomore commercial music major Laura Denis and junior journalism major Briana Byus. The two roommates performed “This Is Me,” from “The Greatest Showman,” where Denis sang and Byus signed in American Sign Language. The judges were touched, including Ojeisekhoba who said, “I think you should consider putting in for a talent show. I think you guys would go very far.”

The second act came from sophomore undeclared student Grace Columbo and junior business management major Alex Wright who led the crowd in worship to “My Hallelujah.” With Colombo on vocals and Wright on keys, their song rang through the night, moving many to tears and genuine worship, including judge Morris.

“I wish the camera could zoom in on my goosebumps,” Morris said.

“That was flat out dope, man,” Ojeisekhoba said with a grin on his face.

The night settled down to a performance of three classic songs, “Sweet Caroline” by Niel Diamond, “I Want it that Way” by the Backstreet Boys and “Fly Me to the Moon” by Frank Sinatra, sung by sophomore voice performance major David Tolman and sophomore business management major Brandon Brown. The duo is also known as “The Heart Throbs.” Tolman led with vocals and acoustic, while Brown accompanied on the electric guitar. The whole crowd sang along and waved their flashlights in unison, resembling a sea of stars.

Shortly after, senior elementary education major Daniel Monroe, two-time Punk ‘n’ Pie winner as a member of the Taco Boys, strolled on stage with his acoustic guitar strapped around his neck. He performed two humorous melodies. The first was dedicated to his freshman year, where he particularly noticed the plethora of good Christian girls. “An Ode to Biola, A Farewell,” was song number two for Monroe, and he used it to thank Biola for all of the wonderful years and memories. For Monroe, this night was not about winning, but instead to simply make others laugh.

“It’s honestly so fun, I was texting Connor [a member of the Taco Boys] before this and he was like, ‘You’re not there to win, you’re just there to make people laugh.’ I was like, ‘That’s a good way to look at it.’” Monroe said.
MOVES LIKE MOONWALKER
Gavin Susantio, also known as the Moonwalker, came on stage in a red leather jacket, with a fedora in hand. “Thriller” began playing in the speakers, and Susantio’s feet began moving. He danced like no tomorrow, mimicking Michael Jackson’s famous moves. It didn’t stop there, as Susantio ripped off his leather jacket, revealing a suit embellished with sequins. He put on his fedora and single white glove and finished the act with Jackson’s famous hip pops and moonwalk. Susantio received a standing ovation.

A boy band consisting of junior marketing management major Gun Park, senior marketing major Devin Johnson, senior music education major Ben Maley and junior business management major Nathan Steele took the stage, performing “Somebody Else,” by 1975 with all on vocals, complete with electric guitar, keys and drums. Although the quartet had not played music with each other for very long, their 1975 cover grasped the crowd’s attention with their relaxed electric tune. For Maley, this performance presented an opportunity to escape from the busyness of school.

“I had a really busy week, but it was cool to get to do something like this that I really wanted to do,” Maley said. “It was fun, performing something we wanted to perform.”

The last act of the night was welcomed by piercing screams and even louder applauding. A crowd of women dressed in all black flooded the stage. They were the women of Xopoc, Biola’s dance team. They showcased their choreographed dance adorned with scarecrow makeup, showing their talent through their seemingly flawless performance.
THE FINAL COUNTDOWN
The time came for the judges to vote for a winner, and both students and parents were welcomed to text in their votes and participate. On the stage were three pumpkins: one bronze, one silver and one gold. The bronze pumpkin of third place was given to Tolman and Brown, aka The Heart Throbs. The silver pumpkin was given to Monroe for his melodious humor. Finally, the pumpkin of gold of first place was given to the one and only Moonwalker, Gavin Susantio. For Susantio, the goal was never to win, but only to entertain those with his passion for Jackson.