Comedy, guts and zombie-killing return in the sequel to the beloved original. 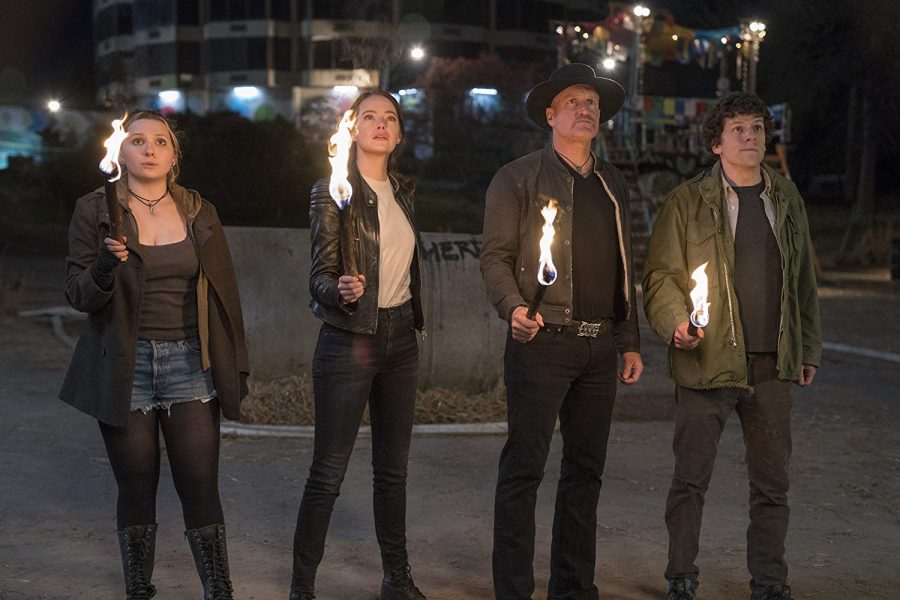 Blending adult comedy with an intriguing zombie apocalypse, “Zombieland: Double Tap” presents fans of the original film with a warm welcome. Tremendously paced and easy to follow, the film updates viewers on events that happened between the last film and current date. Similar to the series opener, it is not a film for those with a weak stomach.
NON-STOP GORE
Unlike some zombie movies, “Zombieland 2” has no limits when it comes to excessive graphic imagery. Exploding heads, decapitation, shredding and crushing are just some of the things that the audience will witness in this blood-soaked sequel.
RAUNCHY COMEDY
Along with its violence, “Double Tap” is hilarious, providing fans with just as much laughter as the original. The comedic, clever and unique banter between Tallahassee, portrayed by Woody Harrelson, and Columbus, portrayed by Jesse Eisenberg, culminate throughout the film. As “Zombieland” known for its adult comedy, viewers should expect nothing less in the sequel. Most likely attracting viewers with a mature sense of humor, “Double Tap” is not for the easily offended.
CAST
Harrelson, Eisenberg, Emma Stone and Abigail Breslin return to play their original roles. In “Double Tap,” six years have passed since the events of the original film.

No longer the 12-year-old girl audiences remember, Little Rock, portrayed by Breslin, is 18 in this sequel. While Wichita, portrayed by Emma Stone, Columbus, and Tallahassee are the same characters we remember and love, Little Rock has changed tremendously, bringing in excellent character development. Plus, there are new human, not zombie, faces added to the cast, such as Zoey Deutch and Luke Wilson, contributing to the humorous hour-and-half run time.

Although “Double Tap” is extremely comedic, it does not surpass the original, including everything that zombie films have and more. Intriguing, hilarious and amusing, zombie fans should see this sequel as soon as possible.