Women’s soccer takes second victory in a row at home 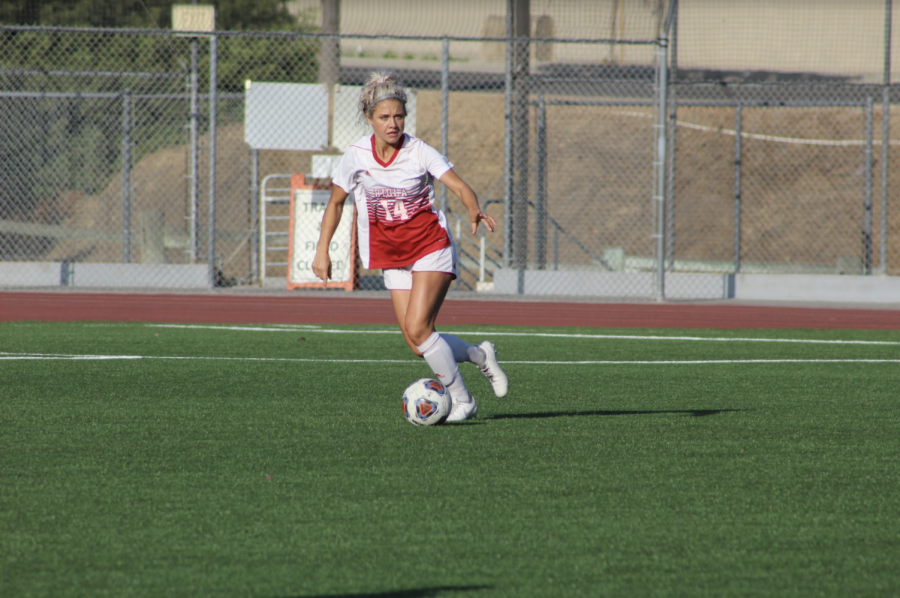 Senior Madyson Brown looks for a teammate to pass to.

Women’s soccer won their second PacWest conference home match on Saturday afternoon against Notre Dame de Namur University. Senior forward Annmarie Alvarez was the difference for the offense in the second half, as the Eagles walked away with a 2-1 win.

Senior defender Colie Martin started out the half with high pressure, shooting in the third minute over the crossbar. In the 15th minute, senior forward Sarah Yang received the ball and cut past the goalkeeper in the box, finishing in the lower corner to make the score 1-0. Minutes later, Yang had another fast break between the center backs, hitting a shot only to be blocked with a sliding save. 28 minutes in, Notre Dame recorded their second shot on goal, which was saved by senior goalkeeper Christina Rodriguez. The Eagles responded by marching down the field and hitting a shot, just over the top from freshman forward Christine Goodman to end the half in the lead.

“Our ladies had to dig in with a little more grit and focus to figure out how to take the lead back and they were successful in doing that,” said head coach Erin Brunelle.
SECOND-HALF DETERMINATION
The Eagles started out the second half with a competitive look at the net in the first minute from Yang. Ten minutes later, the Eagles fouled in the box and NDNU took a penalty kick and scored to tie the game 1-1. Biola transitioned quickly across the field as Rodriguez made a save in the 65th minute. The Eagles worked the ball down the field and senior forward Paula-Marie Labate crossed it to Alvarez who scored a header goal in the 77th minute. Biola won the game 2-1.

“I think it was pure adrenaline knowing that we were tied 1-1 and knowing that my coach called me off the bench and I had to do my job,” said Alvarez.

Up until this match, the Eagles held a clean sheet for seven games. The Argonauts boasted 11 shots during the game and Rodriguez had an impressive five saves. The Eagles (7-3-1) will be back out on the field on Oct. 26 at 4 p.m. against University of Hawaii at Hilo at Al Barbour Field.