The Eagles recruited seven new athletes, three of which reach 6’9” and above to the 2019-20 lineup. 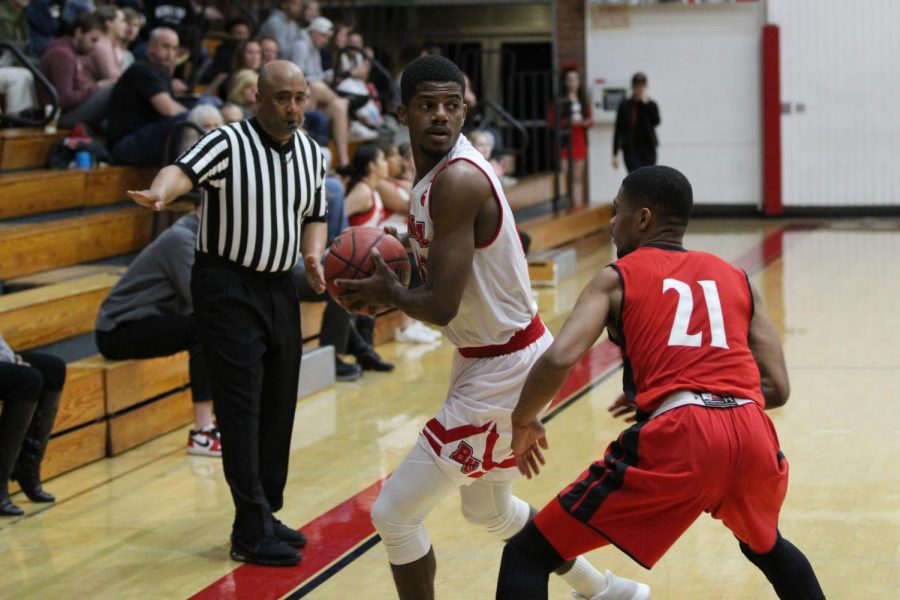 Sophomore guard Alex Wright looks to advance the ball into the paint.

Men’s basketball ended the 2018-19 season in a three-way tie for fifth place in the PacWest Conference, right behind rivals Azusa Pacific University. Unsatisfied with the results, the boys are aiming at to push through the middle of the pack for the 2019-20 season, a dream that is not far fetched from reality.

The Eagles took a hit when they graduated four valuable seniors. However, head coach Dave Holmquist found a solution. Instead of dwelling in the mediocrity of seasons past, the coaching staff has recruited fresh legs and is determined to turn the program around. Seven new athletes have been added to the team, three of which span 6’9” and above.
THE WALL
“The team has been completely changed this season, as we have five transfers and two freshmen,” said 6’10” freshman forward Lucas Elliot. “My goal this year is to be a role player. I’m not going to be the player that scores all the points, but I can sure be the one [to] make sure that others do.”

Last year the Eagles lost their key rebounder, Alex Talma, who is now playing professional basketball overseas. Thankfully Holmquist brought in Solomon Ruddell, a sophomore transfer from the University of California, Irvine. The environment at UCI was unfit for the 7-foot forward. He said the coaches were manipulative and dishonest. Ruddell then transitioned to Biola, where he has found the coaching staff to be more upfront and honest than his experience with the DI Anteaters. Ruddell will be the new big man protecting the paint for the Eagles.

“I’m focused on prioritizing defense and rebounding, so those are my two biggest calls to win,” Ruddell said.
DEFENSE WINS CHAMPIONSHIPS
Defense was lax last season. The struggle was significant, however, Holmquist and the team are closing in on the problem.

“Coach Holmquist has made it very clear: we need to be a good defensive team,” Elliott said. “He has put a huge emphasis on this, and with a good defense comes a good offense.”

By becoming a more defensive driven team, the Eagles hope to compete with Division II competitors.

Transition is going to be another key factor in the Eagles offense. Alumnus Trevor Treinen was a star point guard, dominating the arc and outside driving lanes. In his absence, players are stepping up to fill the holes and driving the inside lanes.

Holmquist is hoping to see a more fast-paced offense turn into easy buckets from his guards. And now, with a taller front court, he hopes to see this come to fruition.

“I would like to try and run and get off the break more than we did last year, Holmquist said. “Every year you hope that you improve in other areas like defense, it needs to be better. I think we are going to try to get some more fast break situations. We need all five guys out there to be rebounders and not just rely on one or two guys. We need everybody to be good rebounders, that will be our biggest challenge.”
TUNNEL VISION
Teammate ties in the Eagles locker room are growing stronger. The subtle softness of last year’s team on and off the court has vanished. Now is the time to grind, as the team is locked down on finding any and all ways to win.

“I can tell it’s been different than last year,” Dennis said. “This year we are all going at each other. It’s a healthy rivalry, bickering back and forth. Last year everyone was too friendly with each other, too nice of guys. Everyone is fighting for their spot, but it is all healthy. If one person is going hard, it makes everyone go hard.”

The Eagles have great potential to beat their previous record due to the newfound determination and talent. While nine Eagles are reported to be dealing with various injuries, hopes are still high to succeed.

The 2019 season will begin on Nov. 8 at California State University San Marcos, however, conference play will not begin until Dec. 5 against Notre Dame De Namur University.

“It is a really great group of guys,” Holmquist said. “They are working hard, bring great spirits and a sense of comradery on the team. Just a really nice group to work with, play with and coach with.”