The Eagles reach .500 in most recent win. 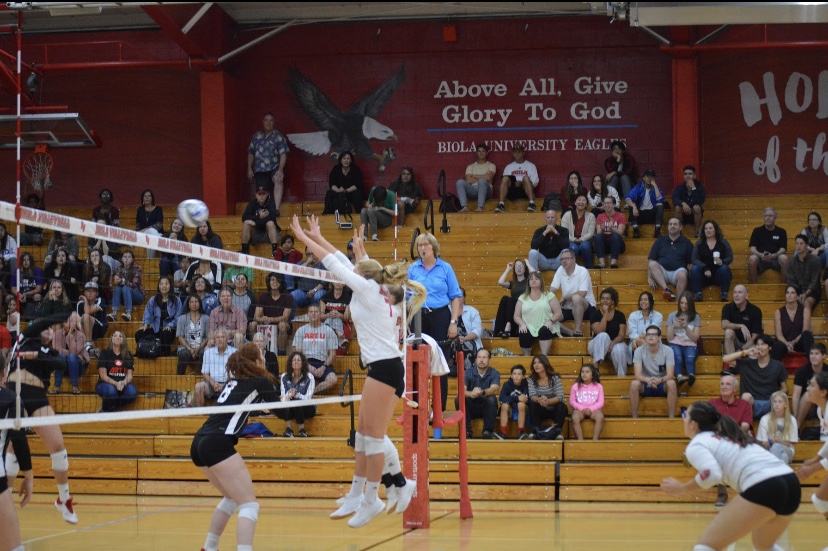 Two Eagles jump for the ball.

The Eagles began the first set strong, leading the Knights in almost every category, racking up 20 digs and and 18 kills. Roth and freshman setter Abby Brewster tied with five kills each. Biola finished on top, 25-18.

“I put a lot of pressure on myself so it just felt good to have my team to back me up so I didn’t feel like there was so much weighing on me,” Roth said. “We did a lot better job of not piling up errors tonight.”

Brewster started out the second set with a kill assisted by junior libero Sami Hover, giving Biola an offensive spark. The Eagles lead the Knights 9-3 with kills from Roth and several key blocks from freshman middle blocker Abigail Copeland. Roth and Brewster traded kills toward the middle of the set, keeping Biola in the lead. Junior setter Vanessa Garcia recorded an ace and freshman middle blocker Raegan Tjepkema blocked the Knights to end the period 25-15.

“It feels awesome [to win], definitely needed I think for our team dynamic coming into the second part of our season,” Brewster said.
BLOCKING MAKES THE DIFFERENCE
Biola quickly jumped ahead 6-1 with an ace from Tjepkema and a block from Copeland and senior outside hitter Sabrina Winslow. Roth and Tjepkema recorded several more kills assisted by Brewster to keep the lead. Copeland and Winslow teamed up again for a big block at the net to make the score 20-11. Roth closed out the match with a kill securing the win, 25-13.

Roth ended the match with 13 kills, more than twice as many as the Academy of Arts leader. Brewster recorded the second-most kills and the highest number of assists with 24.

“[The players] do a good job studying plays, they do it on their own too,” said head coach Aaron Seltzer. “They follow a good game plan, they’re very smart.” Biola (9-9) will be back out on the court Saturday at 3 p.m. against Holy Names University.