Eagles have third tie in their fourth double-overtime game of the season. 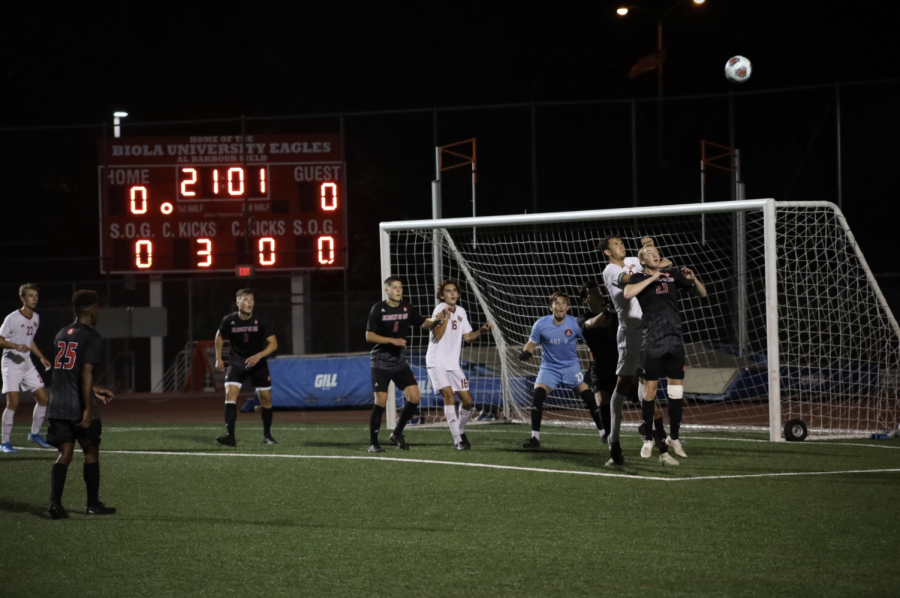 The Biola men's soccer team tries to get the ball into the net after a corner kick.

Men’s soccer looked to pick up their second PacWest conference win at home against the Academy of Art University Urban Knights on Thursday night. Both the Eagles and the Urban Knights were scoreless throughout the game and fought till the end of double overtime. But neither team could come out with a win, tying the game 0-0.

The Eagles took off quickly in the first half by attempting five shots and five corner kicks to the goal which were their most shots in the game. A few minutes after halftime, Art U pressured the Eagles with a tough defense only allowing senior defender Jake Munivez and junior forward Jack MacDonald to attempt two wide shots to the goal.
EAGLES REMAIN SCORELESS
Freshman goalkeeper JD Gunn also picked up two close saves. In the last few seconds of the game, Art U kicked towards the goal which was later blocked by an Eagle at the buzzer, moving the game into overtime.

The first overtime was slow for the Eagles with no shot attempts to the goal and falling short to two fouls. Four minutes into double overtime, the Eagles came close to falling short by Art U, before Gunn saved a close shot.

“I think we saw a lot of room to improve but it’s still early in conference. We’ve been struggling these past couple of games to score,” Gunn said.

The Eagles also took on two corner kicks which were headbutted by the Urban Knights and freshman midfielder Alex Lugo led the team in double overtime by attempting two wide shots to the goal which fell short, resulting in a final score of 0-0.

“Overtimes, it’s a double-edged sword. I think we needed to do a lot more though, just better runs, more activity,” head coach Todd Elkins said. “Try to get their defense off a little bit but couldn’t quite create the best chances that we needed to score.”

The tie moved the Eagles to 1-0-2 in conference and 3-4-3 overall. The Eagles will look for a win at home against Notre Dame de Namur University on Saturday at 7 p.m.