Senior defender Madyson Brown broke a program record for most minutes played in a career. 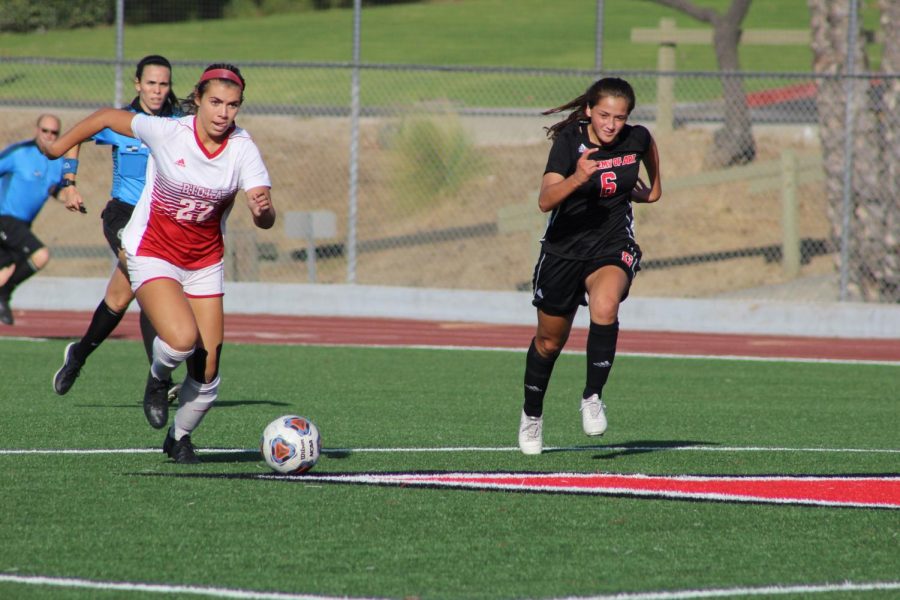 Senior Forward Annmarie Alvarez dribbles the ball down the field.

After several away matches, women’s soccer won their first home game of PacWest play against Academy of Art University, 2-0. Sophomore midfielder Katelyn Penner scored the first goal of the match and the second was counted as an own goal. Senior defender Madyson Brown established a program record with the most minutes played during her four years at Biola.

The Eagles began the first half with high energy. Senior forward Sarah Yang took a shot in the first minute, forcing a save from the Knight’s keeper. Ten minutes later, Yang had another look at the net, hitting a shot low center. Biola continued to flex a dominant offense with shots from freshman midfielder Halie Jamir, freshman forward Christine Goodman and senior defender Colie Martin. Despite frequent shots throughout the half, the Eagles walked away tied 0-0.

“We had a goal set in mind to start off our home PacWest play strong with our stretch of five games at home in a row,” said head coach Erin Brunelle. “We’ve played away a lot and so we wanted to come and make a statement.”
SECOND HALF WIN
Brown hit a shot over the crossbar to mark the start of the second half. Biola continued to pressure the Knights with shots from Brown and Goodman. Penner was the difference in the 53rd minute, scoring high center to make the scoreboard read 1-0. Ten minutes later, the Eagles forced the ball into the attacking third and played it across the net when an Academy of Arts player scored an own goal. Jamir closed out the game with a shot and Biola won 2-0.

“Honestly, I just saw the ball and the opening and I just hit it as hard as I could. I haven’t scored yet this season so I was like today is the day,” Penner said.

Brown made history within the women’s soccer program with the highest number of minutes on the field of any player. Brown racked up 6,234 minutes in an Eagles jersey.

“I couldn’t have done it without the support of especially my coach believing in me since I was a freshman. And I was very fortunate to be able to start out playing,” said Brown. “This is a great honor to get.”