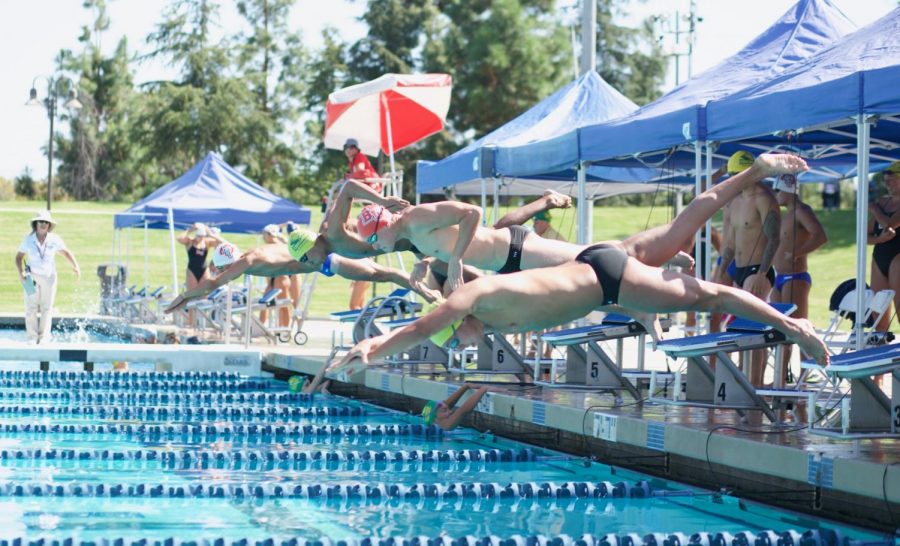 A Biola mens swim team swimmer dives into the pool.

Eagles swim and dive teams attended the Pepperdine Invitational in Malibu, where the men’s team took fourth place overall and second in the no-division category. The event was originally two days long, though it had to be cut short due to poor air quality caused by the Saddleridge fire. The cancelation of the first day led to divers and swimmers being pushed into one day of competition, on Oct. 12.

The women’s dive team placed sixth among the women’s teams, even though they did not have any swimmers with them. Freshman Ashley Vitale placed third in both the one-meter and three-meter boards getting a 158.95 and a 163.40 respectively. Freshman Chloe Hartman followed closely behind in the one-meter board by scoring a 157.35, earning her fourth place.

The men’s team top 200-freestyle relay placed first in the no-division event as senior Andrew Benson and freshmen Dylan Pon, Alex Ness and Tanner Smith achieved a time of 1:29.93. They placed fourth overall in the event. Benson’s 200-medley relay team took second overall in the event with a 1:37.50.

The men’s swim team placed fourth overall in the meet with 195 points, and second in the no-division. The Eagles will return to the pool on Oct. 25 at University of California, Santa Cruz.