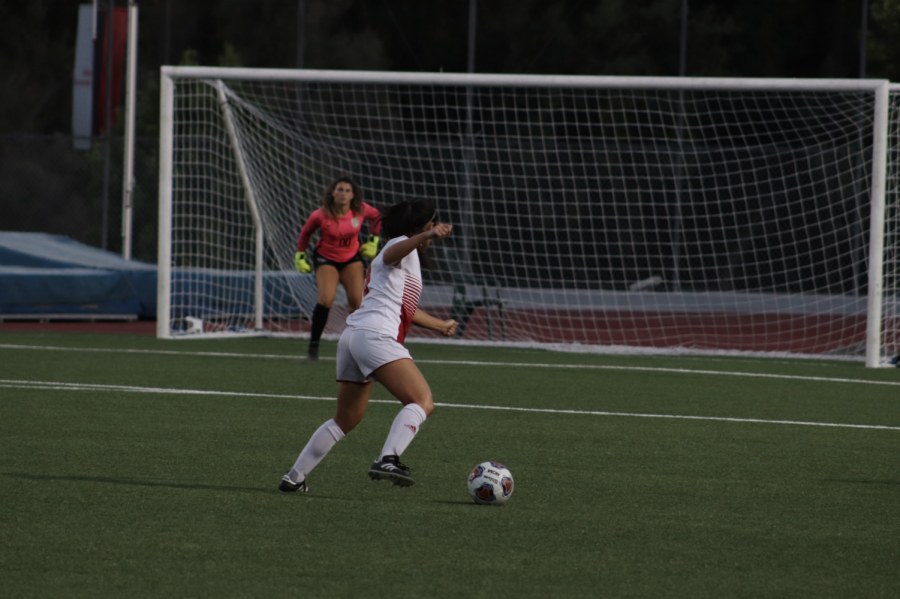 Senior Forward, Sarah Yang, gets ready to kick the ball into the goal.

Women’s soccer went north to take on Dominican University of California Saturday afternoon and continued their winning streak by topping the Penguins 1-0. Senior goalkeeper Christina Rodriguez made program history for the cleanest sheets after today’s shutout.

Dominican started the match strong, forcing Rodriguez to make a save within the first five minutes. Senior forward Annmarie Alvarez responded to the attack with a shot of her own which went wide right, 10 minutes in. Biola continued to press and Alvarez hit another shot, saved by the Penguins keeper. Six minutes later, the Eagles earned a corner kick which saw shots from senior defender Alyssa Chavez, senior defender Madyson Brown and freshman forward Mason Stansberry. Biola won several corner kicks towards the end of the half but Dominican stood strong to keep the score 0-0.
LATE GOAL TOPS PENGUINS
Junior forward Madi Demetropolis began the second half with a bang, forcing the Dominican goalkeeper to make a save in the first minute. Sophomore midfielder Katelyn Penner followed suit with a competitive look at the goal just a minute later. The match took a physical turn deep into the second half with a smattering of fouls from both sides. Two Penguin players earned yellow cards. Biola countered the physical game with a goal in the 78th minute from senior forward Sarah Yang, assisted by Penner. The Eagles finished out the game, 1-0.

Rodriguez led the defense with a save early on to keep Dominican scoreless. Playing all 90 minutes makes her the new leader for cleanest sheets in Biola women’s soccer history.

The Eagles (5-3-1) will play again on Thursday, Oct. 17 at 4 p.m. at Al Barbour Field against the Academy of Arts University.