The women sweep with top finishes and place fifth at the Vanguard Invitational. 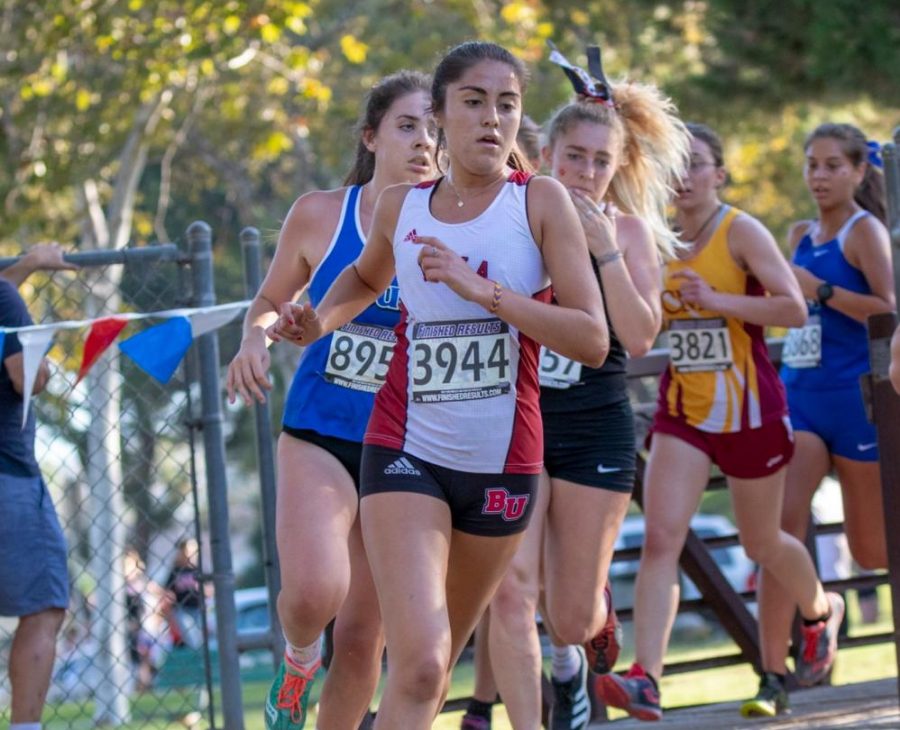 Biola cross country runner runs ahead of her opponents.

Men’s and women’s cross country traveled to Costa Mesa, California to compete in the Vanguard Invitational on Saturday. The men placed ninth out of 13 teams and the women finished fifth out of 13 teams.
WOMEN EARN HIGH PLACES
The Eagles flew in the 5k races by four Eagles placing high in the top 50. Freshman Caroline Stetina came out on top for Biola by placing 25th with a time of 19:07.1. Freshman Haleigh Guerrero followed behind by finishing 34th with 19:24.5 and senior Shannon Howell placed 37th by a time of 19:35.8. Freshman Faith Grisham finished in 44th by a time of 19:50.3. The Eagles finished the invitational by placing fifth by a top-five runner time of 1:38:09.6.
MEN FALL SHORT IN 8K
In the 8k race, two Eagles placed within the top 50. Senior Nic Nelson led the Eagles by finishing in 38th by a time of 26:37.7. Freshman Connor Bramel finished not too far behind in 42nd by a new season-best time of 26:43.1 and his time was 26:43.2. Sophomore Luke Sutherland finished in a close race by a runner from Menlo College and won by placing 53rd with a time of 27:14.3. Overall, the Eagles placed ninth with a top-five runners’ time of 2:16:04.1.

The Eagles will compete in their final invitational of the season at the California State University Fullerton Titan Invitational in Fullerton, California on Oct. 25 at 5 p.m.