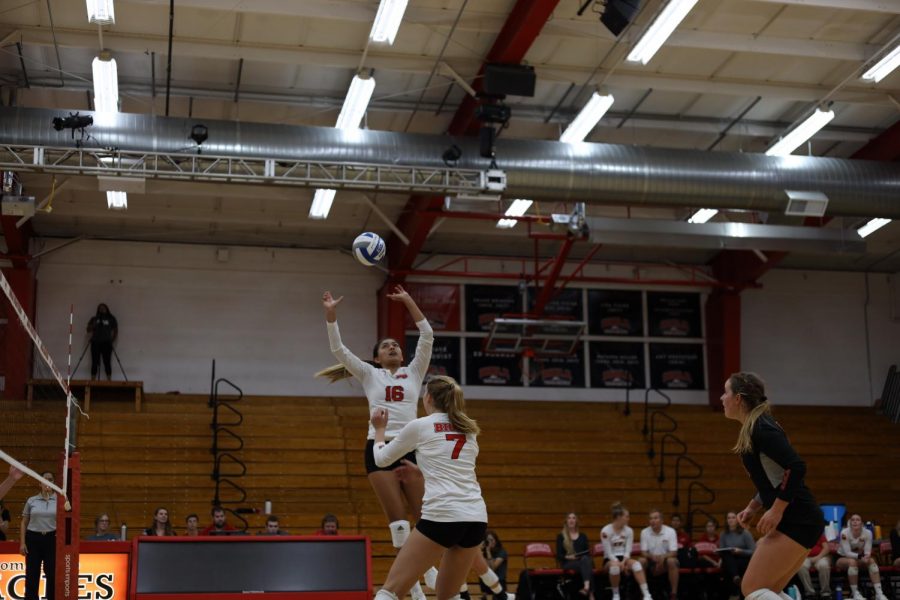 Junior Vanessa Garcia jumps towards the ball in order to pass towards her teammate.

Eagles volleyball bounced back with a big win on Thursday over Hawaii Pacific University, 3-1, after a tough loss against Chaminade University the night before. Biola is now 5-3 in the PacWest conference courtesy of Thursday’s win, (23-25, 25-21, 25-17, 25-22).

The Eagles got their feet used to the water in the first set. It was the only loss of the night for Biola, 23-25. From there on out it was total domination by the Eagles. Freshman setter Marissa Price dug her team out of the second set with consistent aces to pull her Eagles to an 11-4 lead. Biola remained calm when HPU managed to tie the game at 20. However, three straight blocks lead to a 25-21 finish.
EAGLES SOAR TO VICTORY
Set three won thanks to seven kills, most of which came late in the set. The Eagles easily took the third set, 25-17. Set four was full of intensity. Both teams looked strong, but Biola prevailed. A six-point run and two kills led to an 18-14 score. The Eagles fought until the very last serve, winning the final set of the night and taking home the win, 25-22.