The Eagles came up short last night, dropping their first match at Chaminade, 3-1. 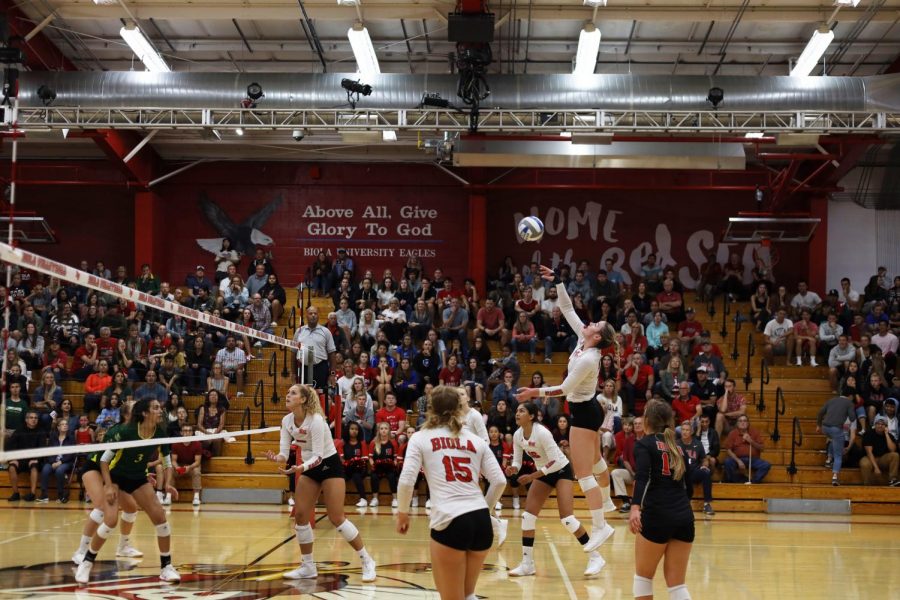 A Biola volleyball player jumps for the ball.

The Chaminade Swordfish came into the day on an undefeated winning streak, 7-0 in the PacWest. The Eagles defeated the Swordfish both times they met last season, and they were looking to keep their streak alive to advance their conference record to 5-2. However, Biola lost in their first of three matches of their Hawaiian island road trip on Wednesday. The Eagles took the Swordfish to four sets, losing the match 3-1.

Both teams looked strong through the first set, as they went back and forth on the scoreboard. Freshman middle Raegan Tjepkema scored back-to-back points for the first two-point lead of the game at 14-12. Biola was not able to hold their ground as Chaminade came back, winning set one 25-23.

The Swordfish also dominated set two, 25-15. The Eagles had a number of service errors and ball-handling errors to keep them far behind Chaminade in the second set.
FIGHTING EAGLES
Biola was not ready to give up just yet. Led by Tjepkema and junior middle blocker Bekah Roth, the ladies put up a fight in the third set. Roth put up three kills and a block on the set and Tjepkema remained solid on her offense.

A combination of freshman setter Abby Brewster’s two kills and a kill from senior outside hitter Becca Branch in the final three rallies lifted the Eagles to a 25-21 win, forcing the match to extend to game four.

The ‘Swords offense remained hot, hitting .406 with 16 kills. They handily put away the Eagles 25-16 in set four, improving their record to 8-0 in the PacWest Conference.

The Eagles saw strong performances from Roth, Tjepkema and Brewster. Roth led the team with 12 kills and Brewster followed behind her with six kills. The standout freshman, Tjepkema, hit a .455 mark on the night. However, these offensive performances were no match compared to Chaminade’s 60 kills.

The Eagles now drop under .500 and stand at a 4-3 PacWest conference record. They will now search for a win on the islands when they face off the Hawaii Pacific University Sharks on Thursday, Oct. 10 at 10 p.m.