After text messages were released regarding the whistleblower case, America must consider impeaching Trump for his involvement in the Ukraine scandal. 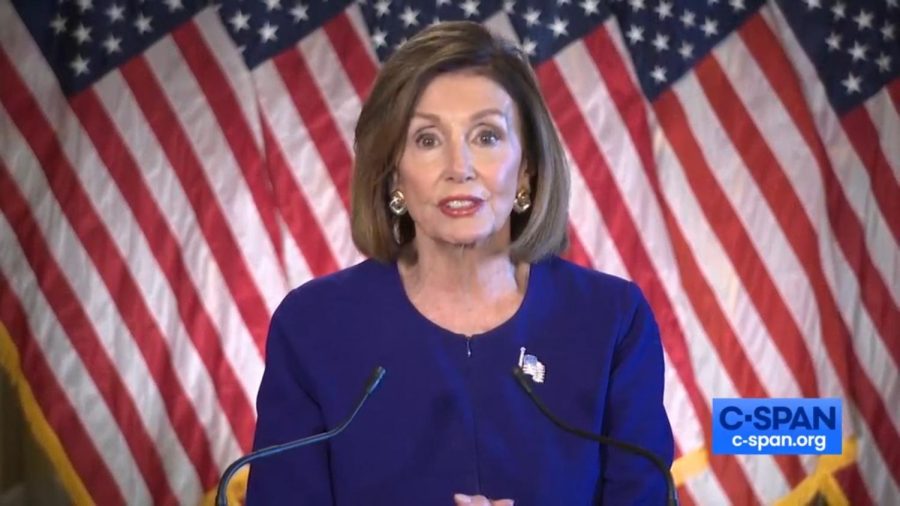 In a July call between U.S. President Donald Trump and Ukrainian President Volodymyr Zelensky, Trump promised American aid to Ukraine in return for investigating Joe Biden’s son to promote his own success in the upcoming election, according to the New York Times. The whistleblower complaint said that Trump “used the power of his office to solicit interference from a foreign country in the 2020 U.S. election.”

The complaint led Speaker of the House Nancy Pelosi to announce a formal impeachment inquiry against Trump for his abuse of power. As the investigation continued surrounding the quid pro quo situation, text messages between American diplomat in Ukraine William Taylor and U.S. Ambassador to the European Union Gordon Sondland, as well as former state department special envoy to Ukraine Kurt Volker, further affirmed Trump’s request of the Ukrainian government, according to the New York Times.

While there has been a debate as to whether an actual quid pro quo situation transpired between the two countries, the text messages make it clear that it did. Trump used Ukraine in efforts to gain an edge over one of his top competitors in the 2020 U.S. election. Trump is not the only president to use his power for his own personal gain, and he will not be the last—if we choose to do nothing. The U.S. must seriously investigate Trump’s actions and consider impeachment for his immoral conduct and his abuse of power during his time in office in order to take a stand for democracy.
TRUMP’S ABUSE OF POWER IN UKRAINE
In the exchange of text messages between the U.S. government officials, Taylor wrote to Sondland that Zelensky “is sensitive about Ukraine being taken seriously, not merely as an instrument in Washington domestic reelection politics.” This text message alone shows that Zelensky was aware of the investigation against Biden’s son as information that would be used to further Trump’s re-election.

However, as the text messages continue, the exchange includes a conversation between Ukrainian official Andriy Yermak and Volker, in which Yermak addresses his concerns about the Trump administration freezing military assistance to help Ukraine defend itself from Russia. According to the New York Times, the decision to revoke military aid was decided before the July phone call—but the Ukrainian government was unaware.

The American government was already heavily involved with Ukrainian affairs—including providing military aid to the country. Trump’s affair with Ukraine was a conflict of interest, and it hindered his ability to govern America fairly, as he could not ethically handle diplomatic relations with Ukraine. In asking Zelensky to conduct an investigation for his own personal affairs, Trump compromised prioritizing the U.S. before his own personal gain. A president that does not hold the best interests of this country to be of utmost importance should not be the president of the United States.
PAST ABUSES OF POWER
While it is difficult to determine whether or not this particular case merits his impeachment, Trump has an egregious history of abusing power during his presidency. According to the Council on Foreign Relations, the CIA, FBI and National Security Agency jointly stated with “high confidence” that the Russian government directed by President Vladimir Putin influenced the 2016 U.S. elections in favor of Trump, undermining Hillary Clinton’s presidential campaign.

Just 14 months into his presidency, six members of his cabinet were under scrutiny for misusing taxpayer money, according to the Center for American Progress Action. Furthermore, Trump recently attempted to shield his tax returns from Manhattan State prosecutors, according to the New York Times, in an effort to discourage the investigation of the hush money payments made to pornographic film director and actor Stormy Daniels after he allegedly sexually abused her.

From the beginning of his presidency—even during the process of his election—Trump has demonstrated unethical behavior that should not be accepted. While none of these offenses have been proven to be grounds for impeachment, these scandals throughout Trump’s presidency reveal his capability to put his own needs before the needs and good of the country—just as he did in this whistleblower case.
IMPEACHING TRUMP
The constitution states that the grounds for impeachment are “treason, bribery or other high crimes and misdemeanors.” However, the meaning of “high crimes and misdemeanors” is not explicitly stated. Trump used his position as the president of the United States to ask another country to conduct an investigation in efforts to continue his presidency in the 2020 election. This should be considered grounds enough to remove him from office.

Whether or not Trump withheld military assistance in relation to the investigation, asking the Ukrainian government for a favor compromised his ability to govern the U.S. and conduct diplomatic relations with Ukraine fairly. After the Ukrainian government discovered that Trump froze military aid, he canceled his meeting with Zelensky in Poland the next day, according to the New York Times.

Trump’s inability to maintain objectivity in his political dealings due to his relations with the Ukrainian government should be enough to impeach him and remove him from office. With such a history of using his power for his own personal gain, it is time to impeach Trump and remove him from office to encourage future presidents to govern fairly, without using their power for their own personal gain.