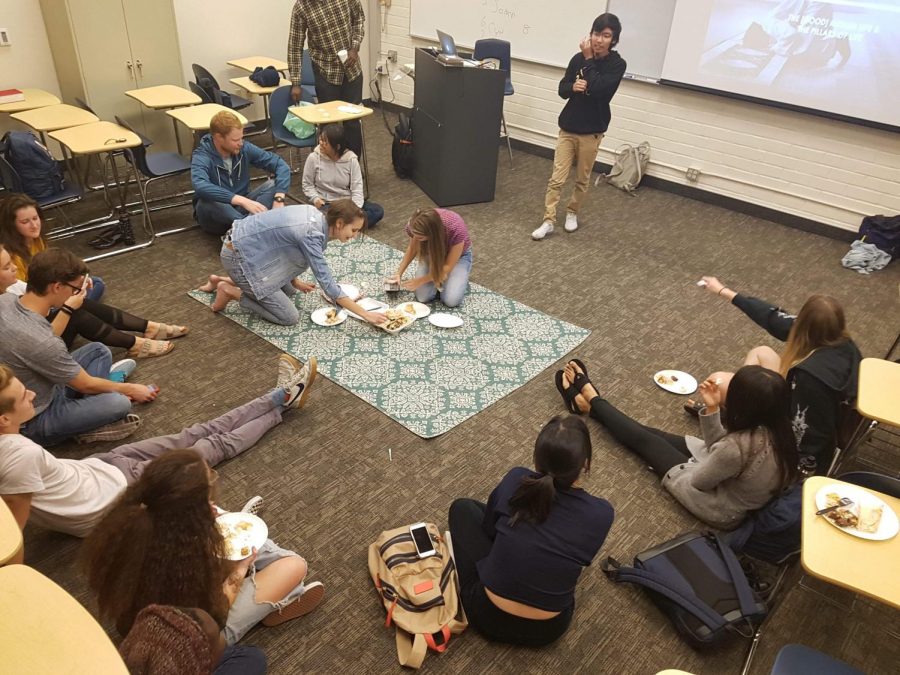 For followers of the world’s two largest religions, student-led outreach club Salam has one goal: peace. Salam, which means peace in Arabic, aims to foster relationships between Christian and Muslim communities.
THEIR OUTREACH
Salam works through student-led visits into nearby areas that many Muslims have settled in and attending cultural events like Lyrical Nourishment at Zawiya Perspective, a Muslim organization based in Santa Ana that seeks to bridge gaps between American culture and Islam. At Lyrical Nourishment, students and other attendees can share what they believe through spoken word poetry. Later they host events for the friends they have made, such as Christmas dinner for non-Christians.

“I like Salam to be seen as an open door or as a bridge, a hospitable one, for Christians to connect with Muslims both intellectually and emotionally, or with both the mind and the heart,” explained junior philosophy major and Salam’s education coordinator Gavin Susantio.

The year’s first meeting opened up with a review of Salam’s mission statement: “Salam is a student-led fellowship that promotes Christian-Muslim peacebuilding by educating Christian students about Islam, combating Muslim and Christian stereotypes, and opening doors for Muslims and Christians to build meaningful relationships.”

This two-fold mission is accomplished through weekly meetings involving a video seminar about the Islamic faith, group discussion, attending events like local cultural celebrations and visiting a local mosque.

The goal of these events is to give students opportunities to meet Muslims outside of class discussions, according to Sarah Lee, a junior biblical and theological studies major and Salam’s communication and events coordinator.

Lee says they’ve taken the group to Little Arabia in Anaheim to introduce them to the unique culture. They want Biolans to meet Muslims, eat balaclava and understand that Muslims are more than the stereotypes they can be portrayed as.

This desire to expose students to a different culture carries over to the meetings themselves, where the first 30 minutes before the session are spent drinking tea and trying new Middle Eastern foods while fellowshipping together, which both Susantio and Lee mentioned was one of their favorite parts of Salam.

“Salam doesn’t feel like something forced or something dry,” Susantio said. “Salam is more of a fellowship… That’s one thing I love most, is fellowship through hospitality.”
FRIENDSHIP, NOT CONVERSION
Susantio grew up as a Muslim in Indonesia, which has the highest Muslim population of any country. While there was a Christian presence in the form of sign-waving street evangelists, he said they worked to convert people through the fear of hell.

“What was good news for the Christians was bad news for me,” he said. “Christians didn’t try to understand people like me.”

This type of conversion is something Salam works hard to avoid.

“We make it a point that [Salam] is not about conversion,” Lee clarified. “The goal is to build friendships and be opening doors so it’s not like we’re enemies or we have to have tension all the time.”

Salam spends the first six weeks of meetings going through an educational video series that focuses both on sharing the testimonies of Muslims who have converted and on teaching students about the religion itself.

“It was really cool that there is this group of people that are passionate about reaching Muslims, that they’re willing to get together on a weekly basis to learn about Muslim outreach,” she said.

When students hear about Salam, Lee says she wants them to think of the Samaritan woman meeting Jesus at the well.

“I want them to see an image of Jesus, who does not only reach out to his own people,” she said. “[The story] is a lot like a Christian meeting a Muslim because of their background and the context and all that, the kindness and gentleness, but also the firm identities of both the Samaritan and Jesus as a Jew. He didn’t give it up, but he interacted with the woman with no hesitation… I would like that to be the image in people’s minds.”