As they hope to emulate last season’s success, upperclassmen have taken the new, young core under their wing. 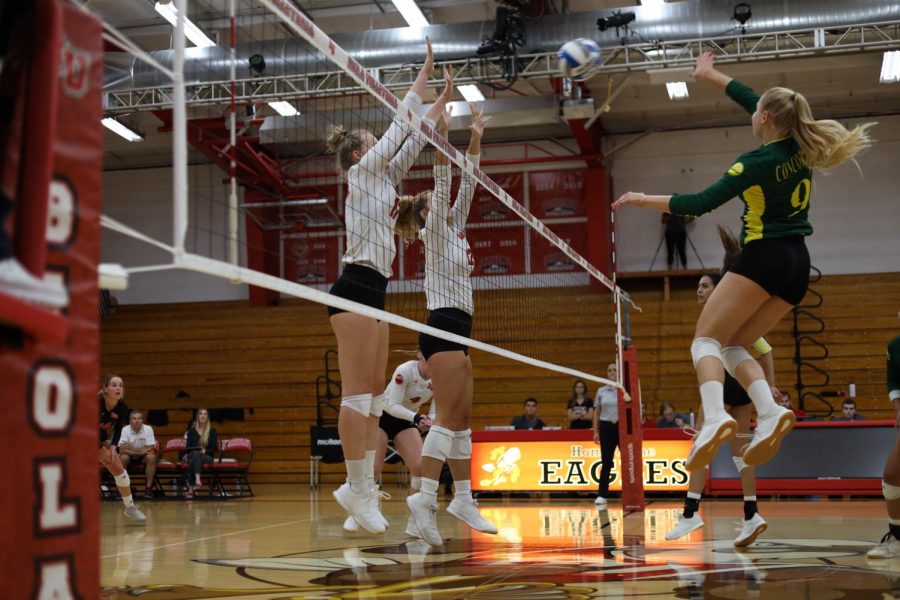 Last season Biola’s volleyball team graduated four starters. The team of veterans led the Eagles to a 30-6 record, including a 19-3 conference record. This season’s team is far younger, having to integrate eight freshmen. In a rebuilding year for the young program, the Eagles are middling at a 6-6 record. 12 games into the season, they’ve already lost as many games as they did last year. However, they are playing strong in conference with a 3-1 record.

Despite the team’s youth and average play, head coach Aaron Seltzer will not diminish team goals for the season, or the resolve of his young players. The team places a high value on mentorship and unified teamwork to overcome the obstacles the new players face in a fast-pace, NCAA Division II climate.

Fall sports got off to a quick start with only a two week preseason for the volleyball team to adjust to the gym. Freshman middle blocker Abigail Copeland said she’s had to adapt to the speed of collegiate volleyball, both during the preseason and the Alaska Invitational. The team now practices every morning, starting at 7:00, for several hours and values the bond they share from that.

“The fact that we do things together and we’re tired together and we push through obstacles together, I think that helps a lot with [our] mental state of mind in a game,” said senior outside hitter and captain Sabrina Winslow.
MIDDLING SUCCESS
At only 6-6, the team’s winning percentage is exactly even. However, with a 3-1 conference record, there is still a lot to look forward to. With a revamped roster, the Eagles have not played with a consistent lineup as Seltzer rotated through three setters and entered five freshmen during their most recent home match against Concordia University, Irvine.

“Each [setter] provides something unique. They all present something different in the lineup,” Seltzer said in regard to heavy rotations during their home opener.

The substitution approach is uncommon, with most collegiate teams playing one or two setters. These rotations are referred to as a five-one or six-two. The team has yet to determine their primary strategy which can make them unpredictable in upcoming matches and therefore dangerous to the teams they have yet to face.

“We always like trying something new, like ‘Hey let’s try this’ and [the setters] are like, ‘Okay, sure, let’s see if it works.’ We are trying a lot of different stuff right now,” said junior middle blocker Bekah Roth.
MENTORS BEYOND THE COURT
Winslow, a veteran on the court, is a true leader, taking care of the young team’s needs. She makes sure each girl is fed, has their gear and answers all their questions. As a senior and a captain, the young program looks to her as a mentor who played NAIA, through the Division II approval process and now as a full-fledged member of the NCAA conference.

As an upperclassman, Roth also has the chance to be a leader. She prefers to “just be a friend,” taking the opportunity to get to know her new teammates off the court. By having close relationships with each other outside of volleyball, the players are able to communicate more effectively on the court.

“I felt immediately welcomed and part of the team,” Copeland said. “The upperclassmen have made it a big goal for everyone to feel included and equal, and it’s been super fun.”

Seltzer and assistant coaches have their hand in cultivating mentorship and a positive community. But ultimately the culture of the team and the leadership of the program falls on the players themselves.

“While yes, my assistant and I encourage and have conversations with upperclassmen about how to be good leaders, a lot of what they decided to say and do comes out of their own heart and desire to serve their teammates and lead the program,” Seltzer said in an email. “Kind of a continual cycle of giving back year after year, it is awesome to see how well our seniors take on that role so well.”
ROAD TO THE END
The Eagles’ remaining games are in conference and the players know more difficult matches lay ahead. As the Eagles look for success through the middle of their schedule, the young core looks up to upperclassmen like Winslow and Roth to lead them to the end.