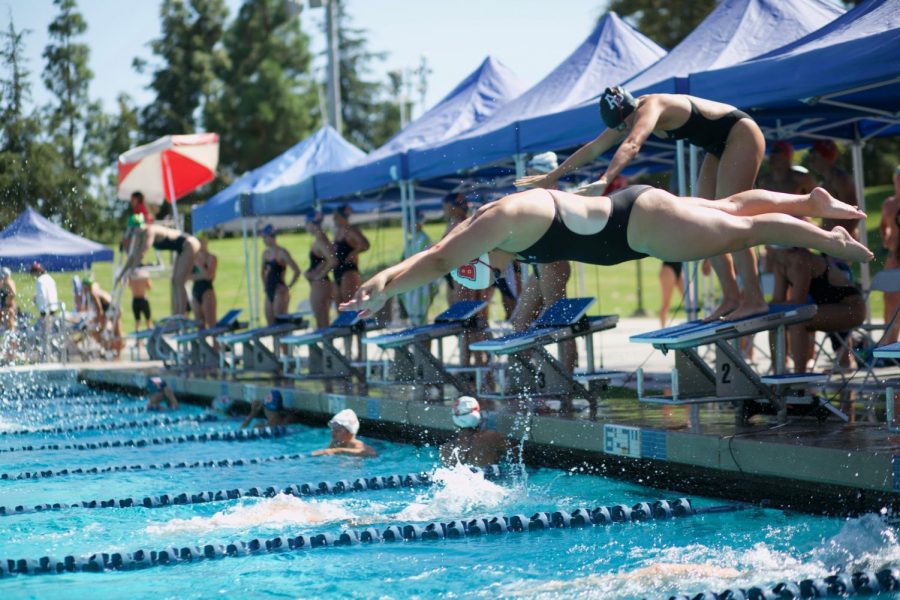 Swimmers dive off the block as their relay partner comes into the wall.

Biola men’s and women’s swim and dive opened their season by competing in the Pacific Collegiate Swim Conference Relays at Splash Aquatic Center on Friday. The meet consisted entirely of relays and both teams earned top three finishes for many of the races. The men finished second out of four teams and the women placed third out of seven teams.
MEN COMPETE CLOSELY WITH FPU
The men had many second finishes behind Fresno Pacific University and came out on top in two races. In the 500-yard 50, 100, 150, 200 relay, the Eagles came away with their first win of the afternoon. Senior Raymond Kam, junior Andrew Benson, and freshmen Jonas Huckabay and Patrick Waggoner finished in 4:14.70, just four seconds ahead of FPU.

Toward the end of the meet, the Eagles came in a close win against FPU in the 400-yard 4×100 IM relay. Junior Colin Reeve, freshmen Tanner Smith and Nathan Schwantes, and Kam won the race with a time of 3:41.61 and FPU finished closely behind in 3:41.88.

Overall, the men fell short of winning the meet by FPU placing first with 88 points. The Eagles came in second with 87 points.

“Today was all relays. So, we all swam together and that always makes it more fun just to have people doing it with you, to where you’re not just competing against your teammates,” Benson said.
WOMEN FINISH RACES IN TOP THREE
The women placed within the top three in many of the races and won one race. The Eagles fell short, one second behind FPU in the 400-yard medley relay with sophomore Nicole Chang, freshman Anna Haaksma, sophomore Faith McAllister and freshman Koyla Vos finishing second with a time of 4:03.46.

After many close finishes, the women placed third in the meet with 82 points. Azusa Pacific University placed second with 88 points and Pepperdine University finished on top with 118 points.
EAGLES FINISH MEET STRONG
“I think that the relay meet that we did today doesn’t necessarily favor our strengths. We’re a team that’s extremely deep and a team that is really good at events that they didn’t necessarily get to swim today,” said head coach Ryan Kauth. “It’s a good foreshadowing of how young our team is and how much we are capable of accomplishing.”

With the men’s and women’s scores combined, the Eagles won the meet with 169 points and FPU followed behind the Eagles with 155 points.

Both teams will return to the Splash Aquatic Center to compete in the PCSC Pentathlon on Saturday at 10 a.m.