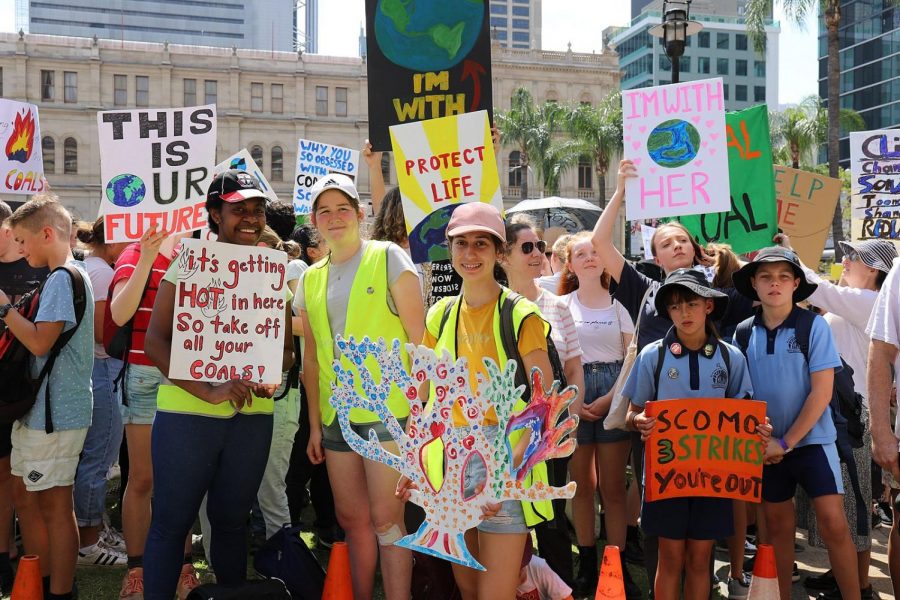 By participating in protests against climate change, youth are fulfilling God's call to be good stewards of creation.

The Mont Blanc glacier is about to collapse. The sea levels are rising at an unprecedented and alarming rate. Coral reefs are dying in the ocean because of warming temperatures. These are a few of the events occurring around the world that are causing great havoc and fear in the hearts of young students. They want to give their children the same planet we were entrusted with, but what will it look like? It’s changing so quickly.
MAKING A STAND
According to the Washington Post, one in four teenagers in the United States took action to protest climate change. “Channeling their anxiety to activism,” the Washington Post shared a poll which revealed 24% of teenagers either participated in a walk-out, wrote a letter to a representative or attended a protest regarding climate change. These numbers bear witness to the increasing number of young people taking a stand to protect what they value and care for.

“It’s getting hot in here, so take off all your coals.” “There is no planet B.” “System change, not climate change.” “Save our planet.” These are a few slogans on protest signs that young high school and college students took to the streets at the global youth climate strike.

Skipping classes to attend protests and rallies, these young people fear losing their beloved planet. They have taken personal action as well. Take straws for example—after seeing a heartbreaking photograph of a turtle with a straw lodged into its nose, young people refused to use plastic straws. In fact, the state of California has gone as far as banning the public use of straws in restaurants unless they are specifically asked for. This has directly affected Biola students as well—as our cafeteria only provides paper straws.
IMPACT WE CAN SEE
Last Saturday, on Sept. 21, 2019, the United Nations met to discuss the pressing matter of climate change. In their report, they called the effects of this change “irreversible” and climate change is still increasing as well as “disrupting national economies.” When reading the press release from the U.N., things can easily look bleak. Climate change not only impacted our environment but affected national economies as well.

When thinking about climate change, we often focus on the pure environmental impact. We forget that as climate changes, the global economy will shift as well. Nigeria is an example of a country that will be hurt with continued climate change. According to Time Magazine, business in Lagos plays a vital role in the nation’s economy but is threatened by a continued amount of abnormally warm days and droughts that threaten their local agriculture. With the rising sea levels, the country is also in danger of coastal erosion. As “one of the fastest-growing cities in the world,” this growing country is at risk for an economic collapse.
THE BIG BLUE
The ocean is vital for our existence. The ocean is a huge source of our oxygen. Climate change has affected the ocean in many ways. According to the Ocean Conservancy, the ocean acts as a buffer of global warming as it absorbed 90% of the heat from climate change. Carbon pollution is also a major factor in the ocean’s evolution as it results in dangerous ocean acidification. Ocean acidification poses a dangerous threat to marine wildlife.
UNITED NATIONS SUMMIT
For the first time ever this year, the U.N. hosted a Youth Climate Summit. This summit provided a platform for young voices to come together and share their fears with world leaders. U.N. Secretary-General Antonio Guterres hosted the event. This opportunity provided for young people showed the entire world that there is hope that the new generation will make change. This generation will do more than previous generations to protect the planet from climate changes’ horrible effects.

It feels like the winds of this battle are shifting for the better. The fear and anxiety which plagued young people evolved into fuel and motivation for action. Many take to the streets to protest or take initiative at home to fight climate change. For Biolans, how will we know where to stand? In the beginning chapters of Genesis, we read that God gave man dominion over his creation. We are to “work it and keep it,” according to Genesis 2:15. After creating the world, God rested and he called his creation “very good.” The earth’s care was entrusted to us. It is our sacred duty to preserve and protect God’s creation—our home. We cannot fail.