Troy Stainbrook was drafted by the Nationals over the summer and will play for the team’s minor league affiliate in Spring 2021. 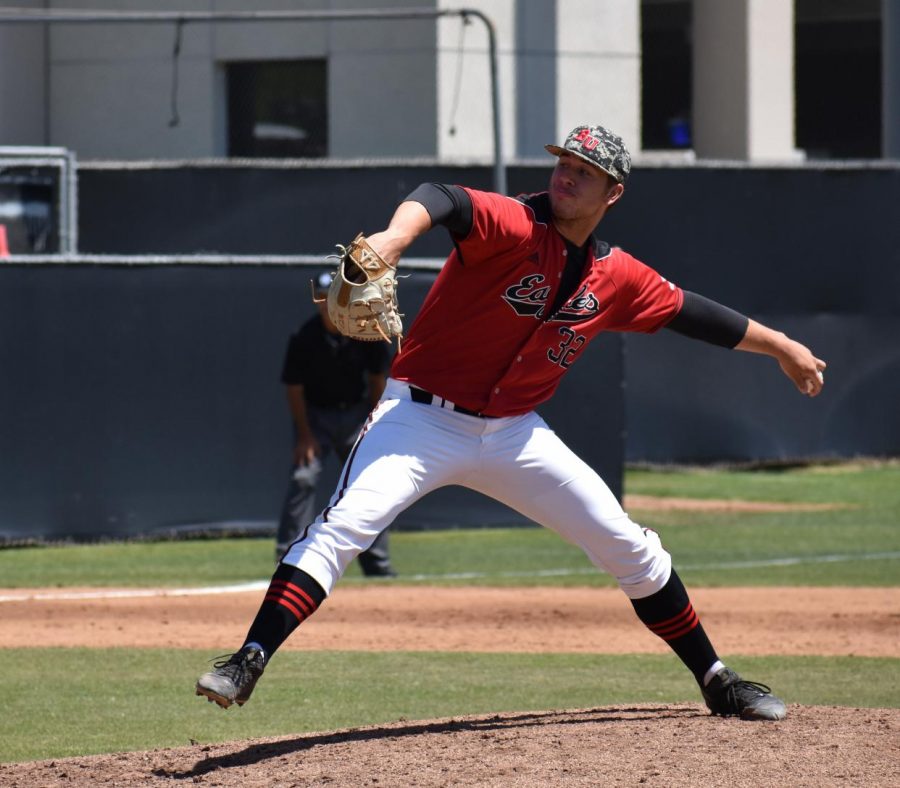 For the Eagles last season, he struck out 53 batters in 41.1 innings, pitched a 2.18 ERA and only let opposing batters hit .208 against him before an elbow injury sidelined him for the rest of the season. Stainbrook was impressive—professional-level. Entering the summer, the big leagues were a real possibility for him.

On a Wednesday in June, he was on the golf course with his dad, playing “the worst round of golf he’d ever played.” His mind wasn’t on golf. June 5 was the last day of the 2019 MLB draft, and Stainbrook, along with thousands of other collegiate baseball players, was anxiously waiting for his name to flash across the screen of his phone. Time moved slower than molasses. His nerves continued to wreck his swing. Then he finally got a call—it was the Washington Nationals. He’d been drafted.

“It gave me the opportunity that I took advantage of as far as baseball goes. It was a very emotional, very awesome day for me,” Stainbrook said.

Stainbrook was selected in the 30th round as the 903rd overall pick and will be competing in the Nats’ minor league starting in Spring 2021 once he recovers from Tommy John surgery.

Twitter confirmed the news for Stainbrook’s teammates who were overjoyed to see their friend make it into the big leagues.

“I was at home and when I saw it pop up on Twitter, I instantly texted him,” said junior infielder Connor Kostecka. “Me and my dad were stoked. Obviously he has the talent and it was just good to see it come together for him.”
READY, SET, PLAY BALL
Stainbrook is sitting out this upcoming season due to recent Tommy John surgery on an injury he suffered during his time at Biola.

“With the injury that happened while I was playing at Biola, I didn’t know if it was going to happen, getting drafted or not,” Stainbrook said. Even with an injury, the left-handed pitcher was still selected to join the Nats, putting his academics with Biola on hold to pursue the professional opportunity. Stainbrook has one semester of college left to complete before getting his degree in marketing, which he plans to do in the future.
A SWEET FAREWELL
Stainbrook’s leadership and energy from the mound are going to be missed by his fellow Eagles.

“It is tough in college baseball to lose your game one starter from the pitching rotation, but we have some young arms who are eager to compete for it,” said head coach Jeff Calhoon in an email. “They have seen what it takes to pitch in that role from Troy and are ready for the challenge.”

Calhoon, who just stepped in as Biola’s new head coach this summer, was an assistant coach at Westmont College when Stainbrook was first recruited by the Warriors. However, they were unsuccessful in keeping him as he took his talent to the University of Hawaii for his freshman year of college. Stainbrook then transferred to the College of the Sequoias pitching for the Giants before ending up at Biola for his remaining years.

“He’s a dude. He is a freak athlete in everything: ping pong, golf, baseball, he is just good at everything. He was fun to compete with. He was fiery, he’d go out on the mound and he was going to compete and give you his best stuff,” Kostecka said. “When you made a good play he always picked you up. When I had a bad day, he’d come over and put his arm around me and pick me up. He’d tell me that he would pick me up and he’d keep us in the game and he always did.”

Stainbrook holds himself to the highest standard which has given him complete confidence in his abilities to perform at the major league level.

“I approached college training the same way that it is focused on professionally,” he said. “You show up and do your job, you find a different way to get better for yourself every day. I feel like I adapted to focusing on individual growth as much as professionals do very early in my college career.”