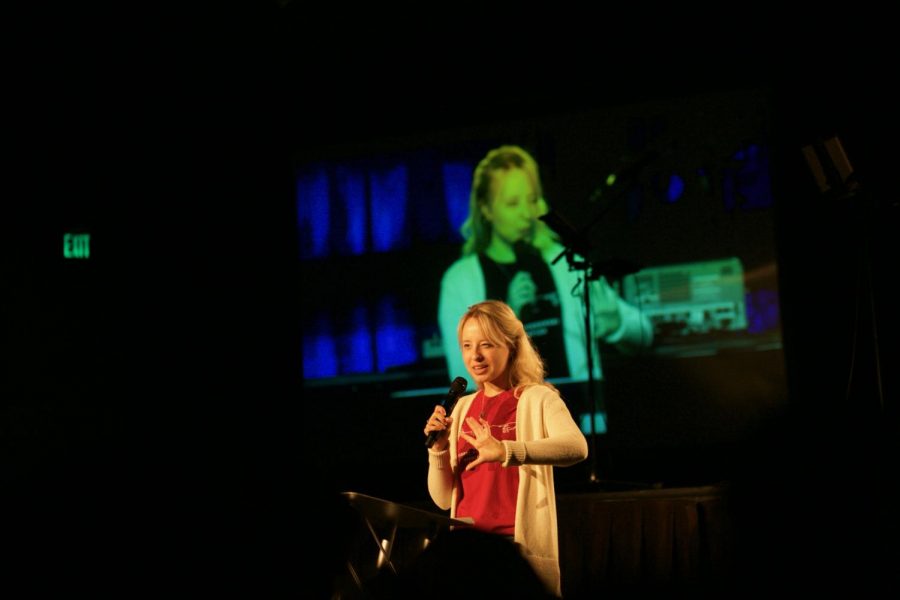 Students piled into Sutherland Auditorium for AfterDark with heavy eyes, but open hearts. The worship band was already in full swing the moment people poured into the auditorium. Voices both high and low joined together in melodious praise. After worship, Student Government Association president Renee Waller opened the night up with her personal testimony of God’s transformation in her life. Joining Waller were two other members of the SGA, also sharing their testimonies.
LEARNING TO DEPEND ON CHRIST
The night began with Waller’s testimony of God’s transforming work in her life. Growing up in the church, Waller always knew of God’s great love for her. Saved at the age of six, she had a strong grasp of who God was and how she should behave as a follower of Christ. However, looking back she realized her struggle with pride and lack of dependence on God.

“If I wasn’t super rebellious, and God loved me, what did I need to depend on God for?” Waller often asked herself. She admitted that once she began college, God revealed her need to depend on Him. She learned to accept the imperfections she found in herself, and her need for Christ even more.

“Christ didn’t die so we could go from a bad person to a good person,” Waller said, “He died so we could go from death to life.”
A TRANSFORMED LIFE
Block senator Ryan St. Pierre also shared his story of God’s redemptive power in his life. Growing up, St. Pierre was always a “good kid” who received decent grades, never let a cuss word slip off his tongue and ultimately believed there was a God. Unlike Waller, St. Pierre did not grow up in church. He occasionally went to Vacation Bible School and youth groups, but other than that, had no serious exposure to who Christ really was.

“For all I knew, if you believed in God and were a good person, you would go to Heaven.” St Pierre said.

When high school hit, the “good kid” persona faded and sin began to manifest itself in St. Pierre’s life. Popularity, self-image and pride consumed him. At this time in his life, he stopped attending church altogether.

“All of a sudden I started to realize I wasn’t this good person that I thought I was,” St. Pierre said.

God used this realization to usher change into St. Pierre’s life. With this new found sense of humility, he sought out a club at his school called Fellowship of Christian Athletes. It was during club meetings and camping trips where St. Pierre learned about the gospel―that there was a Savior that died to forgive him of his sins. It was then that St. Pierre finally surrendered his life to God.
GOD CARES ABOUT THE SMALL THINGS
In the midst of moving off to a secular college, vice president Seth Gladysz found a sense of freedom, and his Bible began collecting dust. Though he grew up in the church, he never sensed a real encounter with God. Shortly after arriving to college, party culture soon engulfed him, and Gladysz found himself chasing fulfillment in unhealthy ways.

Gladysz’s roommate was a Muslim that challenged his faith. They often discussed religion, and because of this, Gladysz began researching Christianity, Islam, Atheism and other worldviews.

“I woke up to the reality that there must be a right answer,” Gladysz said, who began questioning his personal beliefs. That weekend, Gladysz went on a camping trip with old friends who were professing Christians. “I still didn’t feel the joy I saw in them, with a God that was so familiar, yet so foreign to me.”

During the last evening of the trip, Gladysz decided to ask his friends the question, “Does God really care about the small things in life?” Before anyone could even answer, one of Gladysz friends lost his wedding ring. Everyone sprung into action and began looking for the ring, but Gladysz stayed still, realizing that in that moment God answered his question. Gladysz sat with his friends and prayed they would find the ring. To his amazement, they did.

“Through his saving grace, God called me out of darkness and into His light,” Gladysz exclaimed.