The Eagles defeated the PLNU Sea Lions 3-1 in a PacWest matchup. 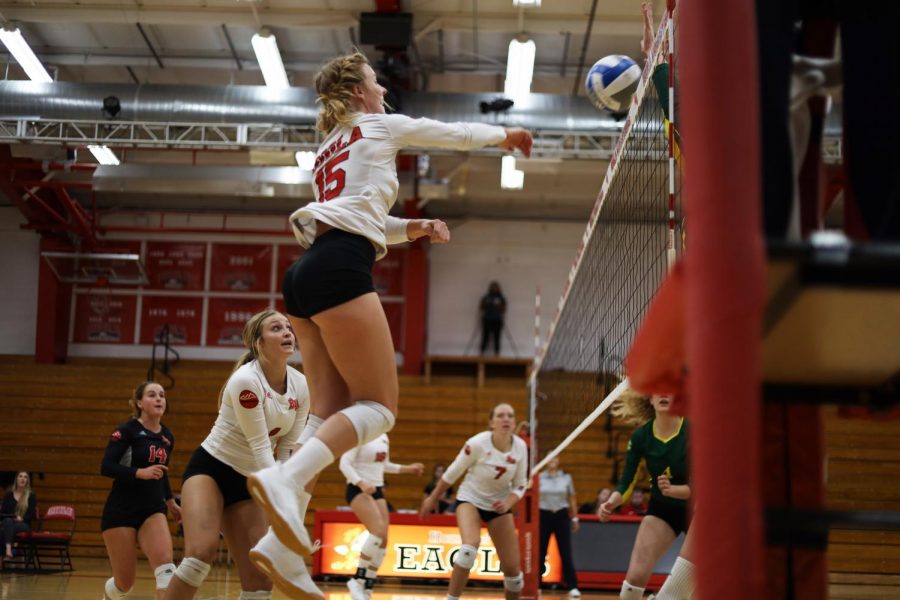 Senior outside hitter Becca Branch hits the ball over the net.

Biola volleyball headed south to San Diego on Wednesday night to take on the Sea Lions of Point Loma Nazarene University. The Eagles were resilient, taking the night into four matches. It was a respectable win for BU who defeated a PacWest standout, 3-1.
SLUGGISH START
Set one was the lowest point of the night for the Eagles. PLNU took control of the opening minutes, quickly going up 14-8 and ultimately defeating Biola, 25-21.
RESILIENT FIGHTING
Set two was when the Eagles decided to show their wings. A switch was flipped, and Biola was now in command of the game with a 19-13 advantage. BU soared above the Sea Lions to the second match victory, 25-23. The energy from set two was carried into the third, where the Eagles went up 11-1 with nine consecutive rallies. Biola sealed the match at 25-21. PLNU was flustered from the Eagles defense. The Sea Lions record their fifth lowest hitting percentage thus far in the season.

It was more of the same in the final set of the night. The Eagles were consistent in remaining a step above the Sea Lions. BU brought the fourth match to a close at 25-20, which sealed the game as a whole in favor of the Eagles.

The Eagles (7-6) will head into rival territory to battle Azusa Pacific University on Saturday Oct. 5 at 3 p.m.