Eagles come out on top from a second half goal. 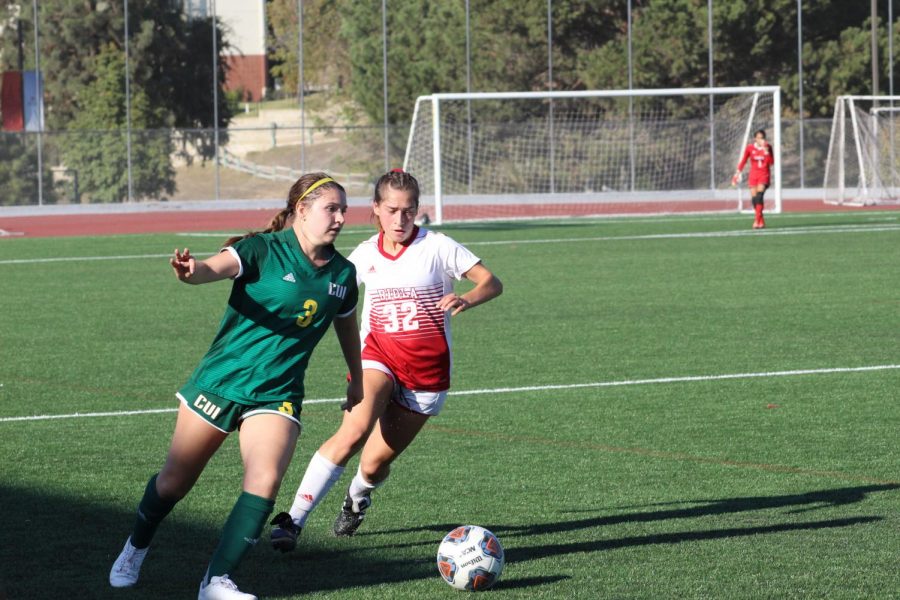 Freshman defender Madi Reeves moves in, in attempt to take the ball from her opponent. During the October 2, 2019 match against Concordia University Irvine.

The first half began with high energy from both teams, splitting shots within the first 10 minutes. The Eagles fought in the final third, putting high pressure on CUI with three corner kicks, one after the other. Sophomore midfielder Katelyn Penner got on the end of the third one, putting it just over the crossbar. Concordia continued to play tough, committing several fouls and earning a yellow card. Biola’s sophomore forward Chloe Chedester responded by winning a corner kick that senior defender Colie Martin got on the end of with a shot on goal. The Eagles went into halftime tied, 0-0.

“Every game we learn something new about ourselves, things that we’re doing well, things that we need to work on,” said head coach Erin Brunelle.
SCRAPPY WIN
One minute into the half, the Eagles won a free kick. The ball was played across the net from Martin to senior defender Madyson Brown who assisted Jamir for her first collegiate goal to make the score 1-0. CUI fought back by pressing into Biola’s defense and getting a free kick 40 yards out. The long range shot was picked up by senior goalkeeper Christina Rodriguez. Seventy-five minutes in, Jamir got another chance with a low shot to the left corner, saved by the Concordia keeper. The Eagles ended the match 1-0 in their last non-conference game of the season.

“It honestly is just a blessing and straight from God… I couldn’t do it without my team, they’re my biggest support,” Jamir said.

The Eagles (2-3-1) will be back out on the field at Pioneer Soccer Stadium on Oct. 10 against Holy Names University for their first PacWest matchup.