The Eagles compete with high-profile schools at the Capital Cross Country Challenge. 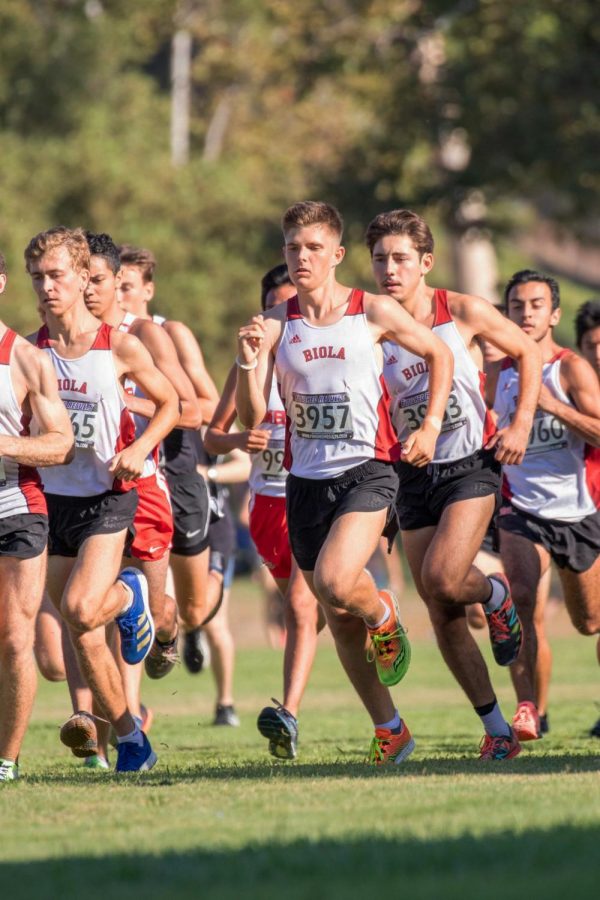 Biola men's Cross Country race their way to the end of the course.

Biola University’s men’s and women’s cross country teams traveled up north to Sacramento, California on Saturday morning, Sept. 28, to participate in the Capital Cross Country Challenge. The competition was intense, as Biola faced many NCAA Division I schools such as Loyola Marymount University, Cal Poly University and New Mexico State University. The men placed 13th out of 35 overall while the women finished the event 27th out of 40.
EAGLES IN ACTION
The men were led by junior Gabe Plendcio, who finished with a time of 24:32.9, good enough for the 18th overall finish in the men’s 8k. Sophomore Brady DeHaven followed behind Plendcio, placing 65th overall at a time of 25:04.2. Junior Ryan St. Pierre was only about three seconds behind DeHaven, as he finished at 25:07.9, earning himself the 69th finish of the meet.

The women were represented by junior Mackenna Mason, who finished at 21:55.1 in the women’s 6k, where she brought home 78th place for the Eagles. Less than a second behind Mason was teammate sophomore Grace Catena, who finished with a time of 22:11.1. Senior Mandy Reyes ended her day with a 22:49.8 time score while sophomore Clara Haynes rounded out the invitational at 22:54.1.

The Eagles will return to action on Oct. 11 as they take on the San Francisco State Invitational in San Francisco’s Golden Gate Park’s Speedway Meadow.