High energy from a big crowd was not enough to help carry Biola’s offense. 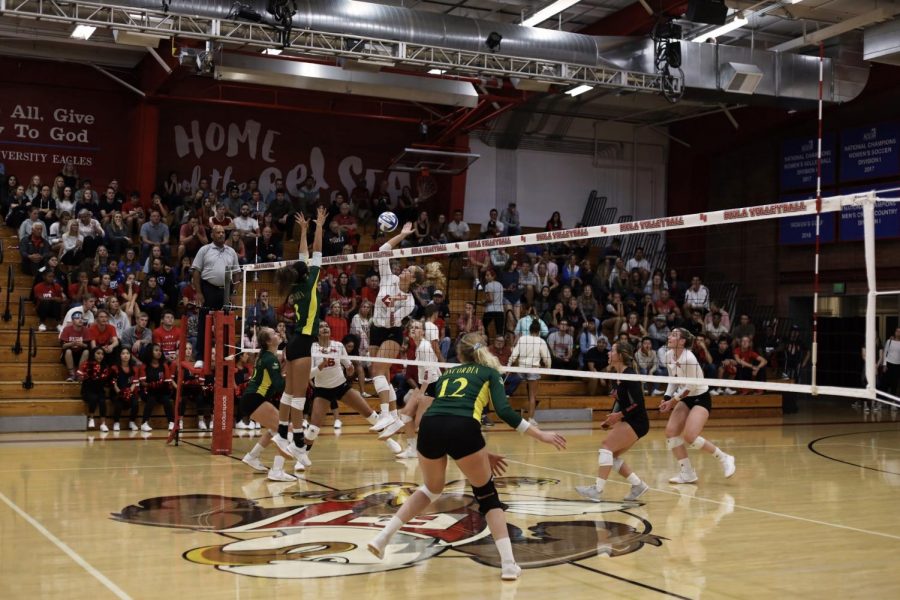 Women’s volleyball played their first home opener of the season against Concordia University, Irvine Saturday night at 7 p.m. at Chase Gymnasium. Despite starting the season on a winning streak, the young Eagles team dropped all three sets to CUI.

“We saw a lot of our weaknesses, so [we are] working on improving that and not letting this loss affect us next week,” said senior outside hitter Sabrina Winslow.

Biola University started strong in the first set with kills from a number of players, including Winslow with four. The game was tight until CUI began to pull away after 21-20. An attack error by the Eagles and two kills from Concordia sealed the set, 25-22.

The Eagles struggled at the start of the next set, going down 7-2 after consecutive kills from CUI. Winslow spurred on Biola’s offense with two kills, tying up the score 12-12 after multiple high-energy rallies. Biola lacked some key blocks at the end of the set, losing to UCI 25-20.
EAGLES FALL SHORT
“There were definitely a lot of nerves going into it… We were all nervous and feeling the pressure of having a big crowd,”  said senior outside hitter Becca Branch.

Biola’s large student section was unable to bring up the energy in the gym, as the Eagles fought to get on the scoreboard at 8-4. The third set went quickly and Branch put the last point on the board for Biola with a kill. CUI finished out the game 25-14.

The Eagles dragged in nearly every category, producing 31 kills to Concordia’s 49. But junior libero Sami Hover was the bright spot on defense, boasting 15 digs, the most on the court between both teams.

“We’re really young, we had five freshmen playing tonight and I think that showed at times. But we just have to get better. We have to continue to get better and that is a process,” said head coach Aaron Seltzer.

The Eagles (3-1) will be back out on the court at Point Loma Nazarene University on Wednesday night at 7 p.m.