The party who cried impeachment

To impeach or not to impeach? While it should be considered, there is not enough evidence to move forward with impeachment proceedings. 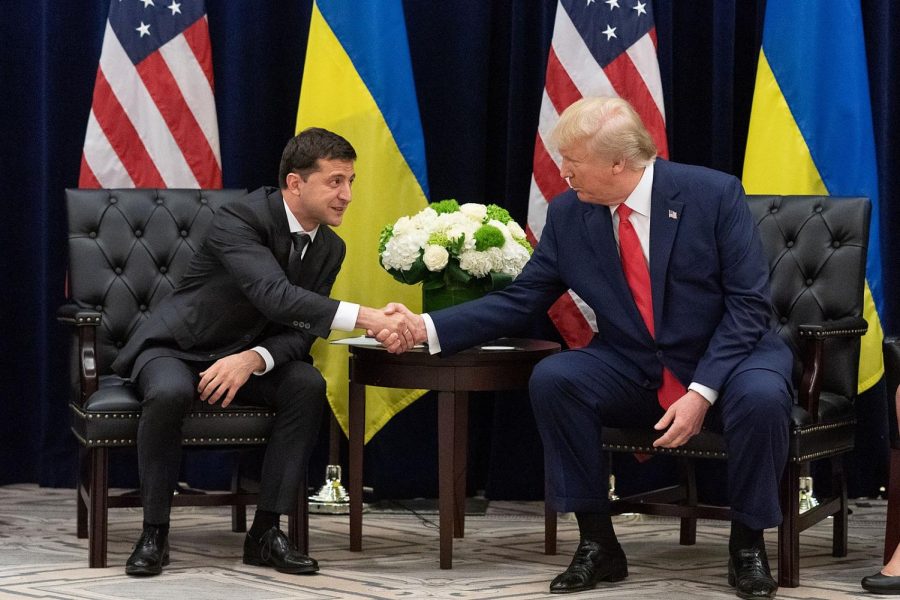 Another day, another impeachment charge. Since President Trump took office in 2016, it seems like every few months a new scandal arises, begging inquiries of impeachment. This should not come as a surprise, given Trump’s shady morals, and this time much of the American public is over it.

Robert Mueller, the Steel Dossier, Trump-Russia collusion––these phrases were dragged through the media ad nauseam for the past two years––and ended up with nothing concrete to show for it. This resulted in an American public that has become disinterested and cynical toward the state of our government.

Regardless of what happens with this latest impeachment charge, the rabid lust for Trump’s blood displayed by the mainstream media has already destroyed America’s trust in the government. As for the question on everyone’s lips, “Should Trump be impeached over this?” There is not enough evidence to prove wrongdoing, and even if there was, the result would not be worth the effort.
THE ACCUSATION
The latest impeachment drama is centered around a phone call made in early September between President Trump and the newly elected Ukranian president, Volodymyr Zelensky. After commenting on aid given to Ukraine by the United States, Trump said, “I will say we do a lot for Ukraine. We spend a lot of effort and time.” The full transcript is taken from CNN Politics.

Trump then proceeded to suggest that Zelensky “find out what happened with this whole situation with Ukraine.” This is referring to past business deals that Joe Biden’s son Hunter engaged in with Ukrainian nationals. The Ukrainian businessmen were eventually prosecuted by the British government on corruption charges.

Trump tweeted in the past that he is suspicious about the possible connection between Hunter and the illegal activity. The accusation leveled by Democratic Speaker of the House Nancy Pelosi is that Trump requested further investigation into the situation in order to gain political ammunition against Biden for the 2020 campaign, in exchange for continuing American aid to Ukraine. If this were to be proven true, it would be indicative of the President using executive power to further his personal reelection campaign.
THE VERDICT
Trump is accused of using executive power to develop his reelection campaign. It should be mentioned, that $391 million worth of aid to Ukraine was withheld before the call between Trump and Zelensky, and was released to the country shortly after, according to Vox.

Even if it could be proven, this kind of action may be shady, but it is not explicitly illegal. Politicians constantly make deals with each other, above and below the tables. The rules over which ones are allowed and which not are difficult to keep up with even for the most educated of us. We cannot prove Trump tried to exchange favors with the president of Ukraine, and even if he did, the illegality of that action is far from certain.
IMMORAL, NOT ILLEGAL
Trump used the resources at his disposal to further his own political career. In other words, he acted like 99% of all politicians act every day. The practical difference of a deal made above the table in the public view and an agreement made under the table behind closed doors is technical at best.

If Trump had gone through legal and public channels to make this move, there would be little to no outcry at all. This is not to say that what Trump did was moral. The move was underhanded, dishonest and morally reprehensible. In other words, it was classic Trump behavior, but that is not enough to impeach. In the same way that Bill Clinton coercing sex from a White House intern was immoral, but not illegal in and of itself, Trump using his power to further his reelection campaign was certainly immoral, but also not illegal, let alone grounds for impeachment.

Regardless of what happens, the vast majority of Americans will continue on with their lives just as they did before. The impeachment horn has been tooted for two years straight, and the American public is sick of it. Much like the boy who cried wolf, the party who cried impeachment has made the American people jaded and cynical toward the very idea of impeachment.