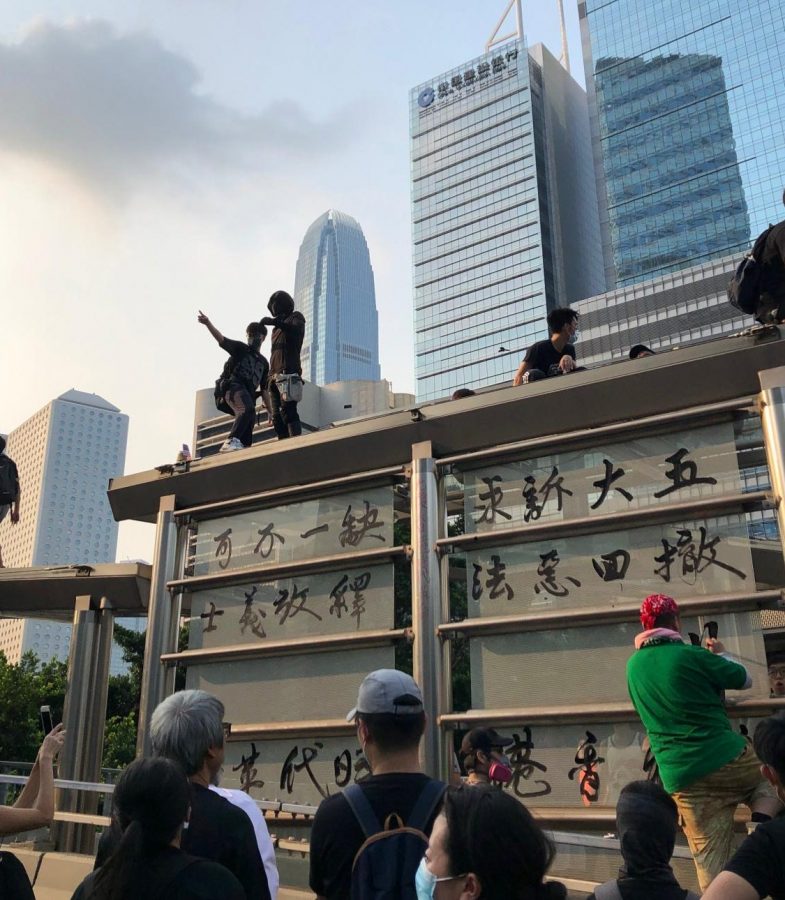 Hong Kong citizens protest against the injustice in their city.

Kelly Pun, a junior communication sciences and disorders student, sat in a Hong Kong restaurant with her family. As they ate, a man walked by with a long bamboo stick––like the scaffolding that holds up construction projects. Her family continued to eat. Then, through the window, they saw a policeman walk by the other way, holding a baton.

The man with the bamboo stick is a protestor for the pro-democracy movement in Hong Kong. The policeman, one of the Hong Kong government’s riot police. The two sides have been at odds since March, after an extradition bill stoked fears of Chinese infringement on the city’s autonomy.

Pun and her family entered the subway to go home, but a wave of protesters filled the staircase. She said her family paused for a moment, then squished to the right side of the staircase, slowly climbing the stairs, walking single file. They exited the subway and made it out onto the street, where they saw protestors chanting, “Freedom for Hong Kong!”

Last June, Alumnus Joseph Wan attended a protest in favor of democracy for Hong Kong. He described his experience much differently: very organized, no pushing, no yelling, no windows broken or shops damaged. He saw a young family standing next to him, carrying a baby. Behind him was an older couple, joining the crowd to advocate for democracy.

“Heck, it’s very hot,” he remembers thinking. “Heck we’re moving really slowly. And then heck there’s a lot of people. Also heck, I’m really proud of being a Hong Konger.”
ANTI-EXTRADITION BILL
Hong Kong’s unique system of autonomy is guided by the “one country, two systems” policy. The policy grants special permissions like freedom of the press and freedom of assembly to Hong Kong, according to National Geographic.

But as the Chinese government has grown more powerful, the one country, two systems policy is showing signs of strain, with many feeling that China is encroaching on Hong Kong’s autonomy. The ongoing protests were sparked on April 3, when Hong Kong’s government introduced legislation that would allow extradition of criminals to China. Many worried that, if passed, the bill would tighten China’s control on Hong Kong, and they gathered as a crowd of roughly 1 million to protest the action, according to the BBC.

Since then, protests have evolved to include broader demands for democracy and freedom.
VIOLENT CLASHES
But the pro-democracy movement has been plagued with conflict, as riot police and protesters clash in the streets. Wan says that interactions between protestors and law enforcement have turned violent.

The violence toward protestors is particularly striking for younger residents of the city like Wan, since the movement has become associated with college-aged protestors.

“I fear wearing a black shirt going [out] because that’s what protestors wear,” he said. “At this point, I’m afraid to see a police [officer] as a young adult in Hong Kong. It just feels like if you look like you’re a protestor…and you’re caught by the police then [they] don’t care whether you’re actually doing anything wrong.”

Wan says the police have disrupted everyday life in Hong Kong, as riot squads have been accused of indiscriminately beating subway riders and firing tear gas at innocent people.

Meanwhile, Pun believes the demonstrations are what disrupt everyday life. Subways are backed up to a standstill, with riders squished up against each other as they wait for the train to move. Protestors rally in the streets, pushing up barricades and blocking traffic.

“I just don’t think it’s really fair to do that because it’s inconvenient and inconsiderate to [the] rest of the innocent civilians who want to still live their life,” she said.
UNBRIDLED FEAR
The violent altercations are a marked difference from the years of safety that the city has enjoyed. Pun says that the night she saw the protestors on the subway, she felt anxiety through the eyes of her mother, a Hong Kong native.

“My mom was terrified because in her head, Hong Kong was always safe,” she said. “So seeing this was a complete destruction of her image of her home and her city.”

Public relations instructor KiYong Kim grew up in Hong Kong. He says the distrust between police and people is a recent phenomenon, only arising as police have begun to respond to swelling cries for democracy.

“There’s a crisis of trust,” he said. “It’s not only a political issue, it’s a trust issue. It’s a, ‘How do you engage with one another and move forward?’ challenge. Because now the Hong Kong people have a severe distrust for their government and the people leading it.”

The conflict has transformed Hong Kong, though whether that change is for the better is still up for debate.
HOME HAS CHANGED
“One second you think your home is a safe place [and] another second you watch the news and it looks like a third world country,” Pun said.

Pun moved back to California to attend Biola this year, but she lives in a state of uncertainty as her family deals with conflict overseas.

The protests may or may not influence Hong Kong’s government. But both sides agree that the protests mark a turning point in Chinese politics.

“My dad told me [not to] come back to Hong Kong after [I] graduate,” Pun said.

And to the rest of the world that watches as the struggle for power and representation unfolds in Hong Kong, Wan says his city needs prayer most of all.

“What Hong Kong needs the most right now is prayer for reconciliation,” he said. “The brokenness between sides and people is too great to be saved by people.”