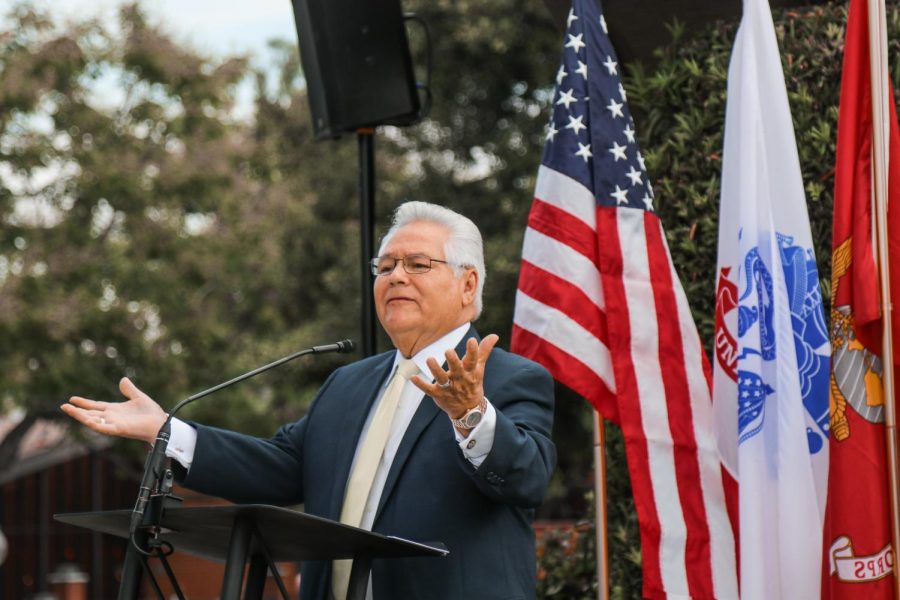 “I want to recognize those of you who are here, who have served and who will serve,” he said at the event. “We must know about it so people will understand [the sacrifices you have made].”

Archuleta, a veteran himself, discussed the need for veterans to be recognized at Biola.

The State Assembly recognized Biola’s dedication to helping their veterans with a certificate that was presented by Calderon to Corey. According to Calderon, veterans often struggle to reintegrate into society.

“There’s nothing worse than feeling like you’re in a place where you don’t belong,” Calderon said during his speech.

The Veteran Center was created as a resource center and safe space for military affiliated students. Much like in the Collegium, students can come together to study, take breaks and eat while still in community with each other. Additionally, the center provides resources related to military benefits and scholarships.
A NEED FOR CHANGE
Alumnus, Army veteran and former vice president of the Biola Veteran’s Association Fernando Arroyo described his initial experience at Biola as disheartening. He recalled approaching the front desk at Metzger Hall to ask about the school’s veteran center, only to be told that the school had none.

“For the first two years here at Biola, I didn’t feel like I was a part of the community,” he said. “I felt like an adult surrounded by children.”

His peers at Talbot School of Theology asked him questions about his time in the Army that made him uncomfortable.

He explained during an interview that he felt as if the only solution was to simply not talk to anyone—until he met military benefits coordinator Adewale Giwa in his Hebrew class.

Giwa introduced Arroyo to a community of veterans present on campus that fueled Arroyo’s passion for the group. Giwa took Arroyo to a BVA lunch and introduced him to director of Commuter Life Katie Tuttle and assistant director of Veteran and military affiliated student programs Jennifer Alvarez. Arroyo would later become one of the driving forces behind the creation of the Veteran Center, according to Alvarez.

His passion for the center and for creating a community stemmed from his poor experience during his undergrad program at the University of California, Irvine where, according to Arroyo, he would come to take classes and leave.

“If the Veteran Center wasn’t here, I wouldn’t be here today,” Arroyo said. “It would have been just like my experience at UC Irvine, but now I want to come here because I have a home.”

Alvarez discussed during an interview how the idea for the Veteran Center came six years ago when she realized military students needed a way to connect more often. Shortly after, Alvarez and Tuttle created the BVA, which was a catalyst for the official creation of the Veteran Center. The project swelled to connect more and more veterans, and today Biola sits among the top 150 schools for veterans, according to U.S. News and World Report.

The process of finding a space for military-affiliated students lasted about three years, but through the donation of a space made by the Student Government Association in November of 2018, the center finally had a home. The cost to furnish the center was estimated at $15,000 but was aided by funding from the Collegium and the Ahmanson Foundation.
LONG-LASTING IMPACT
Arroyo hopes veterans will now be able to come into Biola knowing they have a community. He also hopes the center will connect veterans to the broader student body by hosting events open to all members of the community.

The center will also provide student jobs that are paid for through the U.S. Department of Veterans Affairs’ work-study programs. Junior business major Tony Sawaya is one of the four current employees and works at the veteran’s resource center in order to advise his peers on how to get aid and how to find out when their benefits will be received.

“I try to help soldiers figure out what’s happening,” Sawaya said. “It’s important for us to help each other out.”