After a hard-fought game against California State University, Dominguez Hills, neither team came away with the victory. 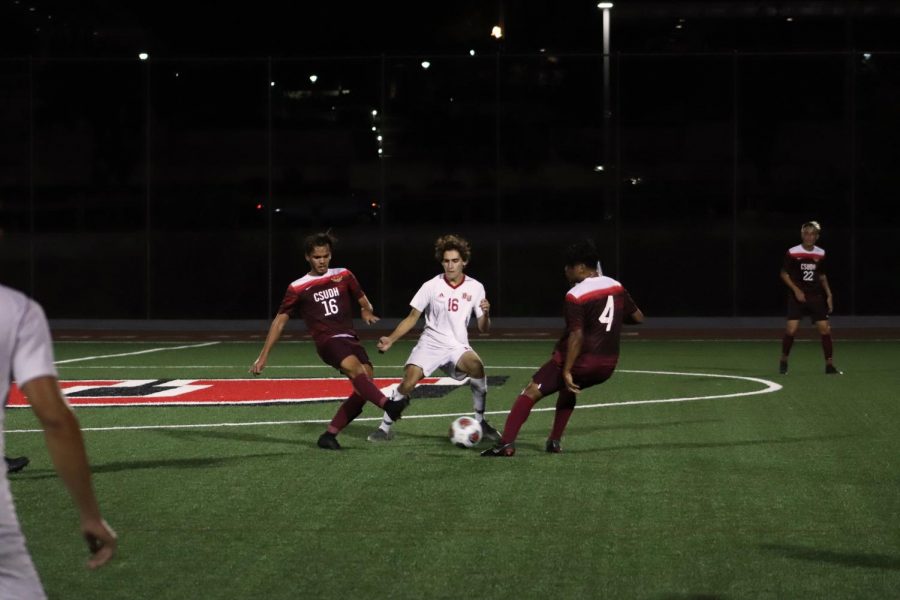 The match started evenly with just two shots from CSUDH and one from the Eagles within the first 15 minutes. Biola finally tested CSU’s keeper 20 minutes in with a deep cross from senior outside back Hunter Finnegan to the head of senior forward Leo Thompson. Just minutes later, Biola’s defense won the ball and transitioned quickly, playing a slicing ball through to Thompson for a one on one match up with the goalkeeper. Thompson’s touch rolled toward the end line and a sliding shot was blocked by a CSU defender covering the goal line, keeping the game scoreless.

“We will let the results take care of themselves,” said head coach Todd Elkins, “I would rather us play pretty well in a few different areas and look up at the scoreboard afterward and be a little disappointed that we didn’t have any goals.”
SCORELESS DESPITE CHANCES
Biola’s next attempt came with just nine minutes left in the form of a cross from freshman midfielder Chad Sinclair to Thompson, again putting his body on the line in the box, though unsuccessful. The Eagles substituted three attacking players with six minutes left, but went into the half even at 0-0.

The Eagles came out with high energy in the second half with quick movements downfield from Thompson. Surrounded by three defenders, Thompson tried to sneak a shot past the Toros keeper but it was kicked away as the goalkeeper fell to the ground. Thomspon tried again in the same play only to be denied by the post.

“It’s disappointing not to score but I have full confidence they’re going in the rest of the season,” Thompson said.

Biola and CSU traded opportunities throughout the second half through multiple corner kicks and shots. Freshman goalkeeper John David Gunn kept the Eagles in the game with several saves. A smattering of shots and fouls from both sides closed out the game with a score of 0-0.
TIE CALLS FOR OVERTIME PLAY
Four minutes into the first overtime period Biola had their first chance with a corner kick. Minutes later, the Eagles regrouped and attacked again with a throw in from the halfline. Freshman midfielder Dylan Memory possessed the ball and ripped a shot from 30 yards out, forcing a save from CSU and earning another corner kick. Despite high energy from both sides, the first overtime period ended goalless.

With 10 minutes left on the clock in the second overtime, CSUDH earned a freekick from 35 yards out. With a curving pass to the back post, Dominguez Hills headed the ball across the net to a forward who missed the goal inches to the left. With two minutes left in the overtime period, CSUDH collected the ball on a quick transition and shot from the inside of the box forcing Gunn to make a big save. The Eagles battled back with two shots in the last two minutes only to conclude the game in a 0-0 tie.

“[We need] the same attacking mindset for next game I know we’re gonna play a really good team at Cal State LA so we’re gonna come out ready,” Sinclair said.

Biola (1-3-1) will be back out on the pitch against California State University, Los Angeles on Saturday, Sept. 21 at 7 p.m.