The Eagles score a goal in the final minutes, but fall short 2-1. 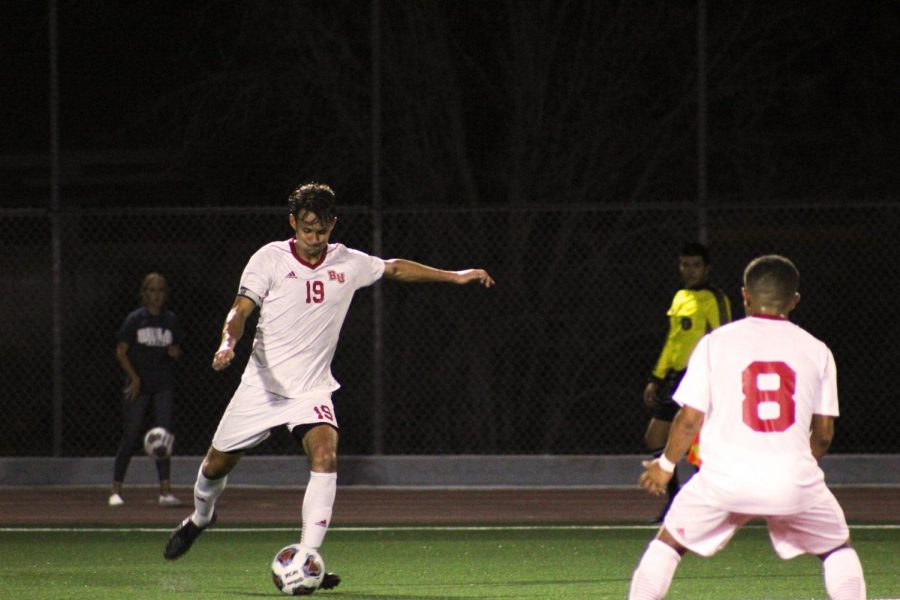 Men’s soccer lost a tough battle on the road against the University of California, San Diego Tritons on Saturday. Biola struggled to make shot attempts to the goal, but managed to score one goal in the final minutes of the game. The Eagles eventually fell to the Tritons  2-1.

Throughout the first half, the Eagles worked on defending the goal and limiting the Tritons to seven shot attempts. Junior forward Jack MacDonald attempted one shot and senior defender Jake Munivez two shots, but fell short due to the Tritons’ goalkeeper blocking each one.

In the second half, the Eagles’ defense fell short of two goals by the Tritons. UC San Diego scored the first goal of the game by picking up a loose ball and directing a high kick to the left side of the goal with 13 minutes remaining on the clock. The next goal came seven minutes later by a Triton shooting the ball low to the left side of the goal.
LATE GOAL CAN’T SAVE EAGLES
A minute later, senior forward Leo Thompson chased a loose ball that swerved to the Tritons’ goalkeeper. Thompson ran the ball and made a quick low kick to the center of the goal for the Eagles with six minutes remaining on the clock. The Eagles looked for a chance to score a second goal but ran out of time after the Tritons attempted two more shots to the goal. The match ended with the Eagles falling short, 2-1.

The Tritons kept freshman goalkeeper JD Gunn on his feet by protecting the goal from 20 shot attempts and collecting three saves. The Eagles collectively attempted six shots towards the goal.

The Eagles dropped 1-3 in non-conference and they will return home to play against California State University, Dominguez Hills on Wednesday at 7 p.m.